First hand they witnessed
the beauty, grieved the loss.
– from "Ashes, Ashes" by Jayne Moore Waldrop

I remembered how my daughter cried when my husband and a neighbor took a chainsaw to the dry, dead crab apple tree at the front of our house on the northeast corner. From the looks of her, my daughter, who was maybe 11, should have been old enough to understand that a dead tree does not share sweet-smelling blossoms in spring or cool shade in summer, piercing color in fall or noble silhouette in winter, that it in fact may share crashing limbs in any season it chooses. My daughter may have a mind and body that move slower than most, but she does not have a slow heart. She cried and mourned the tree as if it were a dear aunt no longer with us, but an aunt she had not spoken to for years. This took me aback, her deep, sincere sorrow for a tree she seemed barely to know, a sorrow that cut through my heart as quickly as that chainsaw through dead wood.

I remembered that long-ago sorrow recently when the woman who had bought and moved into that house – the only home my daughter had known for the first twenty of her twenty-one years – told me that her husband had another tree taken down after a storm sent limbs crashing onto his truck in the driveway. It was the tall, lush ash tree out front on the northwest corner. My daughter had adored that tree, a tree that she had collected leaves from, that had been the subject of a school report, that had given shelter to so many robin babies we would watch from a high window. Oh! And remember the time my husband rescued one of the babies that dangled from the nest by a caught leg while the anxious mother swooped about him, screaming? Here was a tree whose brilliant yellow crown against a sapphire sky proclaimed fall. For years we had paid an arborist to care for the ash tree – to prune unwieldy or dangerous limbs, to treat it against the deadly emerald ash borer that had invaded Kentucky from the north. Now it was gone.

Memories fade with dying trees and houses left behind, but my daughter, by God, is still here. After surgery after surgery after treatment after treatment after medicine after medicine. After years flying by like so many robins through the seasons, she is here. And so am I, here to swoop and scream at threats or stand in silent gentle shelter even as my limbs grow heavy, for I know how sorrow rides just under the skin waiting for the slightest opening to release it to the world in wails that you didn’t know were possible. I will protect her from that. She is the beauty, the beauty who feeds the seam of green deep inside me, and for her, I want to gather and grow the good of everything – memories, houses, trees.

And so, on a visit to our former neighborhood soon after I heard of the ash’s fate, I did not excitedly point out our old house to my daughter as I usually do. Instead, alone and quietly, I took in the emptiness where the tree had stood. In the mere seconds it took to drive past the house, I absorbed the loss even while asking myself, does my daughter need my protection? For that matter, did the tree? 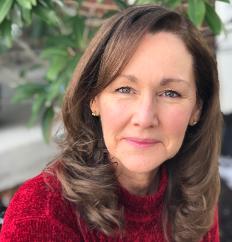 Angie Mimms writes from home in Louisville, Kentucky. Having worked as a reporter, editor, communications director, freelancer, and blogger, she has placed news articles, features, columns and book reviews in publications throughout her home state and beyond. She holds an MFA in Writing from Spalding University.