Prophesy to the Breath
novel excerpt by Austin Ross

Richard had dried and shriveled like a prune left in the sun. His body was pocked with infections for which he had refused treatment: caverns of boils and rashes and abscesses that blistered the skin in patterned ringlets. He had believed God would heal his body through prayer and medicinal plants, the hope being that these might be able to save him from the ravages of time and age, under which the Fall had placed his fragile body in subjection. What remained of him now filled Ruth with dread at the passage of time. The skin of his face had been drawn back, pulled tight over bone as he'd grown even thinner since the divorce. His goatee—which had remained black as tar for as long as she'd known him—now had a single ribbon of pure white that streaked down the left side of the chin.

“Richard,” she said, speaking now to his dead body. She thought of Ezekiel prophesying over dead bones. Son of man, can these bones live? “Richard, I’m here.” O dry bones, hear the word of the Lord. She heard someone down the hall call for an orderly. And the bones came together, bone to bone. The squeaky shuffle of tennis shoe soles on tile. The sinews and the flesh came upon them, and the skin covered them over; but there was no breath in them. “Naomi’s not here.” Ruth felt silly, like she was trying to make conversation with a sofa or an armchair. “She didn’t want to see you. I think you understand. I brought you this; don’t go reading anything into it.” She produced from her bag a tiny framed wedding picture, her favorite: the two of them over thirty years ago in sepia tones. The photograph had faded around the edges. In it, Richard stood tall and strong; Ruth’s face held a smile so true and genuine it looked as though she could die of happiness right then. The photograph was now an artifact, along with everything else from their lives together. Ephemera and ash. Even the concept of marriage itself, once a bedrock, was on shaky ground in her own mind. She placed the photo on Richard’s chest, wrapped his fingers around it for him. “It’s a good one. That was a good day. Everything that may have happened—at least that was a good day.” There was a tightness in her throat but she knew the past was too complicated a thing for something like sentimentality. Prophesy to the breath, son of man. She held her husband’s grizzled hand, felt the coarseness of the knuckles, the thickness of the tendons. Gone were the crisscrossing of veins on their backs. With plague and with blood I will enter into judgment with him.

There was a time when he had once displayed a certain tenderness. One night long ago, as the two of them read (Richard, The City of God; she, The Once and Future King), her husband had put his reading glasses aside and suggested they play a game of chess. Ruth had never been good at chess—never had the patience for it—but acquiesced. They cleared a space on the coffee table and, sharing a bottle of wine, played until the sun set beyond the Appalachian mountains that encircled the Mid-Ohio Valley. Richard lit some lilac- and vanilla-scented candles and suggested he show her what he’d been learning regarding the value of chiropractic adjustment. She was his willing subject as he touched her spine, rubbed his fingers up and down the vertebrae, breathing shallowly through his mouth as his fingertips gently explored the crevices between discs. He explained to her the importance of the rotators and multifidus muscle palpation in the cervical, thoracic, and lumbar spine. The activated, or tender, muscles indicated where to adjust. He had her lay on her stomach on the floor—found a spot at the base of her spine, just above the buttocks. He caressed this for a moment in tight circles with his fingers before, flattening the base of his palm against her, instructed her to take a deep breath in through her nose and out through her mouth. He followed her into the absence of breath and swiftly pushed her hip downwards. She heard a loud crack like the snapping of a stalk of celery, and felt such relief that she exclaimed in a wordless sigh. Richard kept his hands on her body but now, as she turned towards him, moved so that his face filled her vision. The warmth of his body travelled through her, linking them as one until he kissed her gently, then firmly, then desperately. They made love on the floor, his goatee prickling her face in a way that somehow comforted. She’d been enamored then of his earnestness and care for her; to have fallen into this life must have been a blessing from God, she thought, and soon they’d opened another bottle of wine. They had praised God together that night but the next morning, Ruth could not picture the precise details of how or when they’d come to bed. She had not known he would use these same tactics on someone else. The gift she had thought of as unique to her alone had meant nothing to him.

As she left the hospital, a copy of the death certificate and a manila envelope were handed to her. The envelope contained the few possessions Richard had on him when transported to the hospital. Inside was his watch, wallet, and wedding band. This last item felt light in her palm. As though it were nothing at all. 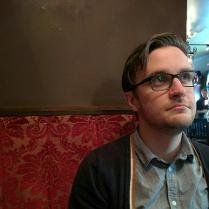 Austin Ross's fiction has previously appeared in Hobart, Necessary Fiction, HAD, and elsewhere. He is a reader at ​CRAFT Literary and lives near Washington, DC with his wife and son. He has recently finished a novel, of which this piece is an excerpt. You can follow him on Twitter @AustinTRoss.