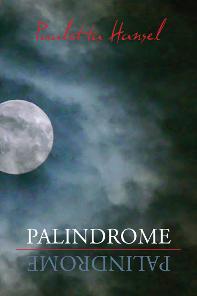 The word palindrome was coined in the seventeenth century from the Greek palin (again) and dromos (way, direction). In her sixth poetry collection, Palindrome, Pauletta Hansel gleans layer upon layer from this term for words and phrases read the same in either direction. Both poet and caregiver as her mother spirals into vascular dementia, she expertly uses the metaphor of a palindrome’s reversal as mirror, teeter-totter, braid of past with present, even as a needle’s eye passed through to examine that most complex of relationships, mother and daughter, complicated further in the lens of loss and debilitation.

Caregiving often leaves us to navigate the murkiness of social services and memory care alone—or at least to feel alone as our loved ones diminish, more and more lost within the self’s cruel prison. “We never know / what we can hold / until it’s on us / and we splinter, / or don’t,” Hansel writes of this journey of memory’s descent with her mother, Larnie, in their bumpy downhill from home to assisted living and finally to skilled care. Yet a large part of the poet’s intention is to illuminate memory, to cross-section it like a vital organ harvested, to somehow fathom the depths of remembrance, mysterious as life itself.

In this unflinching work, Hansel employs a variety of styles, including journal entries, palindromes, syllabic forms, and sonnet series, as well as narrative poetry, turning the quartz of her mother’s days and their life together to catch the best light of what has passed and what remains and to discern a deeper understanding of the illness’s progression. Using various forms, Hansel says in the Introduction, helped her craft art from the ongoing loss she witnessed and allowed her the “creative distance” to observe and shape into a literary manuscript her mother’s fading spark and being.

In narrative style, we hear Larnie’s memories of being sent from the green mountains of Kentucky during WWII as a girl to the harsher streets and schools of Buffalo, the outsider warned not to speak of home “unless / to say how much better city life was.” We see Larnie as the “strong spine” of Hansel’s childhood who made everything for the family, from Barbie doll purses to tortes without recipes, who upholstered furniture and built bookcases, who whomped her drunken father with a jar of canned blackberries to protect her own mother and siblings, who let fly sass and fierceness even as she waned, “folding into the deep / cave of the place inside,” her body curved into its own Pieta.

While these accounts sing Larnie’s character, her backbone, and certainly her lasting influence on her daughter, the more crafted, imagistic poems have real staying power, startling in their beauty, wonderment, and transcendence. In the title poem, Hansel muses on time, that waystation of in-betweenness, and how the aged sometimes wander in its wilderness:

If time, too, is a place

we journey through as

(we ask) these tracks we travel

take us back again,

the way my mother remembers,

now, the future, lives in the past?

And, being a palindrome, the poem repeats itself in a new way/direction, creating an arrowed, winglike effect, beginning (again): “Now the future lives in the past.” Indeed, Hansel and her mother are flying back and forth through time, shouldering its burdens, first the mother carrying the daughter on her back, then switching roles, just when the headwinds come swift and dark and the path ahead is uncertain. “No one tells you how old you’ll be someday,” she writes, “old / enough to be mother to your mother.”

“What do we owe the flesh that parted to give us life?”

Especially wonderful are the brief poems salted throughout the book. In these gemlike pieces, Hansel flexes her imaginative and metaphoric muscles even as the subject of each is fast losing her ability to make meaning. Each is unearthed from the agonizing distance between mother and daughter, one watching the other’s dissolution. And in each, Hansel mourns the dying amid the living, “I cannot see what you were / in what I have before me, / though in dreams you still stand / tallest in the field.”

“What do we owe the flesh that parted to give us life?” Jeanne Bryner asks in her endorsement on the book’s back cover. Indeed, and what if the relationship has been trying or lacking, as all close relationships ultimately fail to meet expectations on either side? Hansel speaks both of herself and in her mother’s voice to address this question. In a journal entry, Hansel describes running her fingers through a sleeping Larnie’s thick, curly hair, “soothing and petting and expressing a love she will not allow when awake.” She continues, “You never were / the mother I wanted at the time / I had you. Always I was / swallowing down the longing / rising for the mother / come and gone.” Larnie then apologizes, sort of, recounting a childhood of not being “a child for long,” pressed too young into duties and caretaking in a house where no words of love were spoken, then taking on the constant work of marriage and her own family.

Isn’t this the story of most families? The child wanting more of the parent’s precious time while, to maintain and provide for the family, the parent must always turn elsewhere? Aren’t our lives so often this kind of palindrome? We cannot fully understand or appreciate what was done for us, for the sake of the family, until we undertake it for ourselves and a new generation. But whatever the circumstances we’ve experienced with our parents, in most cases it boils down to showing compassion for the least of us, which they surely are, demented and diminished.

One of the most powerful—and telling—images in Hansel’s work is not in words, sonnets, or counted syllables. It is the photograph of her and her mother following the Introduction. Larnie sits in a chair, Hansel kneels behind. Water is at their backs, a lake or river, with a railing. Larnie squints at the camera. Hansel smiles, her head cocked to the right, making them appear almost as a single two-headed figure. Hansel’s clenched hands steady her mother’s shoulders, as if to restrain her or hold her steady for the picture. Here, they seem to be the palindrome of the title: Hansel wanting mightily to keep her mother in the present, and with her; Larnie focusing on neither past nor present, soon to cross that wide water, the railing keeping her yet earthbound. (Larnie passed some months after the book’s publication, in January 2018.) So much complicated love, so much “rage, rage against the dying of the light,” as Dylan Thomas pleaded at his father’s deathbed. So much back and forth in and out of trial and error, into the amazing grace of two lives intertwined, one easing the other across the waiting bar.

Linda Parsons is an editor, poet, and playwright in Knoxville, Tennessee. She is the reviews editor at Pine Mountain Sand & Gravel, former poetry editor of Now & Then magazine, and has contributed to The Georgia Review, Iowa Review, Prairie Schooner, Southern Poetry Review, The Chattahoochee Review, Shenandoah, and American Life in Poetry, among other journals and anthologies. Her most recent poetry collection is This Shaky Earth, and her newest endeavor is writing for The Hammer Ensemble, the social justice wing of Flying Anvil Theatre.