Lacy Snapp on
Lock Her Up
poems by Tina Parker
Accents Publishing, 2021 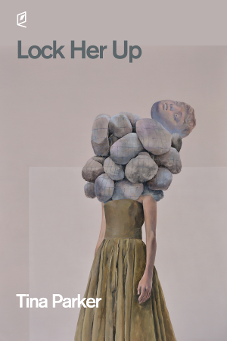 "High strung / They called her / Unsettled” (22). Today these labels are often thrown around in jest, but they can trigger more pain than comedy. It’s important to remember the true, dark history behind these words when associated with mental health—that saying them one hundred years ago could have been a death sentence for an obstinate woman.

Tina Parker’s third book of poetry, Lock Her Up, reconstructs the voices of three women of the not-so-distant past who were sent to the Southwestern Lunatic Asylum in Virginia. Drawing on official documents dating between the late 1800s and mid-1900s, Parker’s poetic accounts remind readers that, historically, women were locked away for reasons ranging from “eat[ing] too much and ch[ewing] tobacco,” being “wild, incoherent frolicsome, and restless,” or “lazy, obstinate, indisposed, and tak[ing] no interest in her home” (5). Parker’s book, composed in three sections, shares accounts of three different women: a “mother,” “daughter,” and “wife” (5). Within each section, lyric poems are interspersed with official documents gathered from the real-life cases of these women. This book is a necessary read because even though Parker did not actually interview these women for their stories, their pain, longing, and experiences were real—as were the unjust psychological treatments imposed upon female mental institution patients of the time by a patriarchal system concerned more with experimentation and pleasing the men who committed the women rather than offering those women compassionate, humane, and sustainable care.

Although readers are informed from the first poem, “Pleas for Admission,” that the three subjects of the book are the mother, daughter, and wife, not all of the remaining poems disclose the speaker’s identity. Further, the poems’ subjects are not always limited to the three main women of the book. In “Doctor Visits,” Parker writes:

With “one” as the only signifier, readers understand the women’s pain as interchangeable—that they all are experiencing similar narratives of having no voice or agency, no name or identity other than their patient numbers and admittance records. Through this format, readers realize this atrocity as institutional—that countless women were reduced to the label of “insane,” locked away, and forgotten by the world until Parker gives their pain a translatable language again.

In “Part One: Admission,” readers learn the names of the three female patients featured in the book: “Mattie M. Roberts, age 19 years,” “Rachel Wells, age 32 years,” and “Emma Darby, age 55 years” (19). These are the “daughter,” “wife,” and “mother,” respectively, who are committed by men in their families. While the women are named in this first section, for the rest of the book they are only identified by their given names on interspersed, official transcripts. Within the poems, it is up to readers to discern who is speaking, and they can often determine that based on what the speaker is lamenting or longing for. A deceased child is rendered through the haunting images of children’s toys such as “doll heads dangling” (17); tools for crafting and artistic expression appear in images such as “hoops,” “needles,” or “[t]apestry and chenille” (18); and the objects listed in “What I Left Behind,” include “1 scrubbing brush / 1 kettle / 3 dishcloths [. . .] 2 packets of ammonia / 1 broom / 1 husband / 3 sons / 1 daughter” (20).

During this first section, the women still have hope for freedom, as seen in “Pleas for Release” where they provide justifications for their behavior, whether from being “widowed at 40 and los[ing] everything,” “betrayed by one who ought to have protected me,” or “overcome with grief” (21). However, these sources of trauma were not regarded as valid enough to warrant proper care, respectful treatment, or release.

Parker shows that the evils of this asylum cannot be attributed to the patients as the doctors and nurses may say; instead, these evils reside within the staff and building itself. How could this place be one for true healing?

Instead, readers witness the grim realities of the women’s time in the Southwestern Lunatic Asylum through “Part Two: Treatment.” These treatments are really just for show or experimentation. In the first poem of the section, “Cover the Mirrors,” the speaker explains: “On and on they hollered / In prayer / Their palms pressed / Oil to my forehead [. . .] They faked my healing / I cannot account for what evil / May enter” (41). Parker shows that the evils of this asylum cannot be attributed to the patients as the doctors and nurses may say; instead, these evils reside within the staff and building itself. How could this place be one for true healing?
As the book shifts into “Part Three: Release,” however, it’s apparent that the likelihood of the women being freed is slim considering the men who committed them do not want the burden of having them back in their family if the women are not willing to submit to the prescribed roles of obedient daughter, mother, or wife. Some of the poems in this section have the same titles as those in previous sections, which provides an echoing effect for their content. “Pleas for Release” appears in all three sections, but they are three different poems. This repetition reinforces the fact that even though the women continue to plead, their requests are not considered. By the third version in the final section, readers learn those emotional factors which reveal the women’s discontent with their lives before admittance: “We were / deranged on jealousy / We were / disposed to violence / We were / disinclined to do anything / We were / dissatisfied with everything” (49).
Throughout the book, we see that the women were not institutionalized to actually receive the care they need, but instead to allow the men from their families and the male doctors in the hospital to further assert patriarchal power and dominance. I’m reminded of Charlotte Perkins Gilman’s reflection in her essay “Why I Wrote ‘The Yellow Wallpaper.” She recalls that following her rest cure with Silas Weir Mitchell as her doctor, she was advised to “live as domestic a life as far as possible [. . .] to have but two hours’ intellectual life a day [and] never to touch pen, brush or pencil again as long as [she] lived.” The ramifications of these instructions were detrimental as Gilman had lost the very activities that were keeping her tethered to her sanity and a sense of purpose. One of the women in the collection similarly longs to be able to sew in order to feel normal; however, she is only permitted to do so during the day with supervision as seen in “In the Sewing Room.” There is a fleeting hope that such activities will provide solace and healing for the patient, but we learn from the official “Psychical Examination” document on the next page that the woman died by “swallowing pins, needles, buttons, to which she was much addicted” (45). The final section of the book shows that a release for some patients is not one that will allow them to return to society; instead, they are ultimately freed from the restrictions and torment of the asylum by being released from this physical world.
Formally, Parker utilizes experimental and unconventional poetic forms, perhaps as a way for her female speakers to resist tailoring their expressions to fit into those expected guidelines of traditional poetry: complete sentences, appropriate punctuation, and logical or linear trains of thought. Instead, the most uniform aspects of the collection appear in those official patient documents—a place of order for the male doctors and family members to communicate and further label the women as “other.” Lists or rules within the collection are juxtaposed with poems that utilize negative space and phrases that are offset by indentions or parentheses. The most uniquely shaped poem of the collection, “Double V,” showcases two columns that meet in the middle and converge into one. The final lines reveal the speaker noting that “Time pools in my hands” (29). In this moment, the patients are not just being physically restricted, but time itself is losing its shape and logic the longer they are confined.
Tina Parker’s unforgettable and necessary Lock Her Up shows readers through historical accounts and three interwoven narratives that these women were the victims of mental institutions that took away their autonomy and hid them from society. This is not a light read—sections make readers uneasy because even though Parker is creating fictitious narratives for the women, the facts are indisputable, and the horrible situations true to life. Although there is a difference of at least seventy years between the final records of the book and the present, society’s default reaction to label women as “hysterical,” “deranged,” or a “witch” for refusing to submit to the patriarchy’s expectations of being pleasantly submissive and domestic allow readers to reflect on the question: have the times truly changed, or are we still just one witch-hunt away from passionate or misunderstood women being locked up again, forced to repent, experimented on, or imprisoned for life? 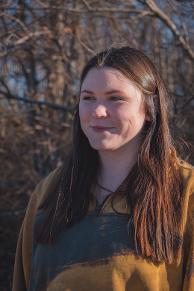 Lacy Snapp is pursuing an MFA at Vermont College of Fine Arts. Her debut chapbook, Shadows on Wood, will be published by Finishing Line Press at the end of 2021. She graduated with her BA in Creative Writing from University of Tennessee at Chattanooga and her MA in English from East Tennessee State University where she now teaches as an adjunct professor of American Literature and Composition. She also works as a carpenter for her self-run business, Luna’s Woodcraft. Currently, she serves as a board member for the Johnson City Poets Collective. Her poetry appears in Snapdragon: A Journal of Art and Healing, Women of Appalachia Project’s Women Speak Volume Six, The Mockingbird, and is forthcoming in The Mildred Haun Review.