“And Jacob swore by the Fear of his father Isaac.”—Genesis 31:53

Personal Injury Parents
Before every county fair, they recited the damages
from last year’s lawsuits. So later,
as moths threw themselves at the lesser moons
strung along the fairway, the night
flushed sweet with the grease of funnel cakes, with bass
pulsing cheap speakers and the heat of a whole
town’s teenage anticipation, instead of thrilling
to the moment that girl from math class
got so scared on the Gravitron she grabbed my hand
and held it, my head swam with the tally of teeth
lost to sudden stops, the number of fingers
severed. Didn’t I know what could happen?
How many ways the world had to hurt me.
Back when muscling a massive rock from atop a well
was the closest thing going to a strongman game,
Jacob met his love Rachel and wept. Rashi said
he foresaw her early death. But who thinks of death
at the very moment their new life begins?
On a lonely mountain, as the sun caught the knife
his grandfather had raised above his father Isaac’s neck,
Abraham’s eyes were still scorched from seeing
Sodom consumed to ash, from witnessing what happens
when we don’t do what God asks: those burnings
dimming Isaac’s eyes as he announced to his sons
his imminent death—in a masterstroke
of Jewish guilt—fifty years before
he actually died: all of it searing up in Jacob’s throat
in that moment of first meeting.
My mother’s college roommate
killed herself; my father, raised in a world
cruel to women, has three daughters. She said
it made her afraid of feeling too much;
he grasped too hard, wincing as we grew
beyond the protection of his arms.
Death meditations of our forefathers, pain
of our parents winding our genes tight as wisteria,
reaching, always reaching for another part of us
to bind to, whispering out when we least expect it.
All winter long I misremember Roethke (I learn by fearing
where I have to go) and can’t let my wife leave
without saying, I love you. Be careful. Don’t die.
Separate from damaged property, “personal” is an injury
to the body, mind, or spirit. My given counsel—
unhired, unfireable, their undisclosed
hourly rate accruing for an unnamed future date—despite
their body counts, their relentless reminders of my
mortality, my parents never mentioned the fear
that brings us closer, that whinnies up from your knees
to lean you against the one you love, or how trembling
sets you in harmony with the elemental
strands of all matter. As that creaking, poorly-rigged
contraption spun us into the dark air, the neon
Tilt-a-Whirl screaming below, there was that girl’s
scared sacred hand, hot in mine. Our whole lives
a fairway lined with dicey enticements, with joy
available for those willing to chance a ride.

“Jacob is now married to two women: a storm of emotion…replaces the calm harbor of fulfillment.”—Avivah Zornberg

The Hendiadys of Marriage
As “milk and honey” signal abundance,
“image and likeness” that we are
chips off God’s block, so the Torah advises,
why use one word when two
will do better?
*
Jacob was hendiadys par excellence.
Crooked heel-sneak, willing
to scam a blind old man, he was also
Israel, able to wrestle from God
the blessing of his true name.
Surely as Jacob married Rachel and
her sister, Rachel married
both those men.
*
And aren’t each of us who are married
married to many people: the one
we knew, we thought, who drew us;
the one who emerges those times
we say, Oh, you’re not yourself today—
a gentle chiding that the person I
married wouldn’t act this way; and
the one who delights you by knowing
every bird on your walk by song alone.
*
Despite being a mother of monotheism,
Rachel loved the household gods
enough to steal them from her father.
Tzarah, one Midrash calls them, another
name for “rival wife.”
*
Yet which is the true partner and which the rival?
Who they are now or whom they’ll strive for?
The one we wanted or the one we have,
or the potential one
we can’t yet fathom?
*
Despite having never hiked a day
before we married—the outdoors
viewed as not invitation but specter—
my wife now strolls the trails with ease,
naming plants along the way: the eerie
eruptions of ghost pipe, the pom-pommed
exuberance of mountain angelica.
Marriage a mutual
View-Master: two images at once
not just tolerable but necessary
for depth of vision, which is itself
a trick of the eye: that woman, confident
in the woods, able to name what she sees,
that girl sure she’ll lose herself
among the trees—the illusion
of one image when both remain.
The wonder of the multitudes
we each contain. The painful, joyful
expansion of loving both, loving
all, of welcoming change. 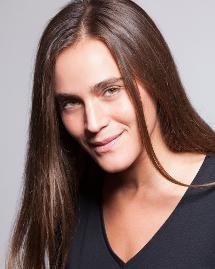 Jessica Jacobs is the author of Take Me with You, Wherever You’re Going (Four Way Books), winner of the Devil’s Kitchen and Goldie Awards, and Pelvis with Distance (White Pine Press), a biography-in-poems of Georgia O'Keeffe, winner of the New Mexico Book Award and a finalist for the Lambda Literary Award. Chapbook Editor for Beloit Poetry Journal, she lives in Asheville, North Carolina, with her wife, the poet Nickole Brown, with whom she co-authored Write It! 100 Poetry Prompts to Inspire (Spruce Books / PenguinRandom House), and is at work on a collection of poems exploring spirituality, Torah, and Midrash.