Good Work by Abby Minor
Today at art class Ayla wrapped a ukulele which we had not entirely meant to sacrifice
in a wad of super thick white pipe cleaner, thick as a carrot as if to clean the pipe of a god, then
commenced to glue aqua tutu fabric to the body of the instrument while the girl who adores
me and last month sent me a letter in pencil suggesting I look up Ephesians 2:10 made a paper
piece of poop with rising

steam threads to place behind me during circle, adoration
in the form of a turd. During circle we said aloud our favorite kinds of art which included
origami, watercolor, frogs, dinosaurs, music, and paper planes; I said “mine’s poetry” and
inexplicably in that moment, while seated in a circle of kids hitting themselves
in their own faces, I remembered an orange bricked alley

with a gray curtain flagging into it from a window, somewhere I once was, although the only
thing I can say for sure is that it wasn’t in America, the memory itself constitutionally un-
American like a postcard full of cobblestones
and plums blown into the half-dead dapple, the late March Appalachian
afternoon, now dusk, in which I can hear not only the dusk-

birds but the first delicate sound of chains clinking across the park from behind the
scraggy evergreens. And as it’s transmitted across the park, that solitary spring sound, it might
sound like the sound of the last irrelevant day clinking away from earth, but I know what it is,
in the way that you know all the little clicks and sighs which add up to the sound of your lover
or your grandmother using the toilet

or lighting a cigarette, and so clinking into me comes an old, polished feeling,
the pebble of domestic eternity rolling down, because it’s my young neighbor, in this evening
into which the squeaky tips of tulip leaves poke, it’s the young man readying the revered
red diesel power stroke for another summer of impossibly
deathless beauty at Beaver Springs. That’s the place

where I believe he and his friends go on Saturday nights, the nights flooded with the great gray-
blue lakes of corn, after they spend long bright hours complicating the engine in the yard while
his wife lays out in a tube top and his kids ride around in the same style of hot wheels jeep I
once tried to help my sister haul up onto the porch so she could ride it
as if off a cliff and she still has the scar…

and while that chunky little comet shoots off the porch into another summer, into
another hour, the young men on the other side of the evergreens put out their cigarettes in the
pink fizzy light of the first stars and commence to carefully idle the red animal, which I suddenly
want to call his red dress, up onto a trailer pulled by a different truck, a gray truck, the necessity
of which escaped me for some time—

I never knew why they didn’t just drive the red tuck itself down to the race
track at Beaver Springs until my friend Dana told me it probably has a special ratio in the rear
end, something about the gearing probably makes it illegal to drive it on the road, rather it’s
built to do stunts like pull a million tons of concrete, or to go
from zero to something

so fast that everyone watching feels like the afterlife just dropped a few feet
closer to earth, right there on route 235 near where it hits 522, something tricked-up
coming closer now:

you follow until you find the whiskey in water bottles

the mountains exhaling fur in the dark

the fire bugs strung in the stiff cloud of trees, the benighted

and the royal cocks in boxers

draped in the flags of the forest

the forts in the forest

the elision of their purpose

field-tripping, I never really knew what they were for

they were to establish the stronghold

all the little towns named after forts, or springs

inside of which you turn around to see

there is the story about the marks made

by the Delaware on the foreheads of the English

which resembled the property marks made

by the English on the bodies of the trees

it is a history of etiquette, to converse

in the same manner as the outlanders do

hence I invoke the column of black smoke

inside of which you turn around and see

the colors and forms of demolition

the derby and the fire bugs in the trees

and you are met by the glance of the Air

if you know what they mean

do you know what they mean

the black crystals I see when I close my eyes

they crackle with threads of white

from art, simplicity and skin in the form of a floodlight

style which has no permanent qualities

and will continue to exist even when the universe ends

like the incomparable goddess to whom concepts of good, bad, color,

and light do not apply:

No doubt at the race track you can buy

Only, or the bumper sticker that says Jack ‘Em High,

it is like all the forms of demolition, the apple

and the lilac which mark the overgrown foundation

no doubt the immolation is ongoing

so it could be art, the un-drivable redness of heaven

it is like the chains being brought out in early spring

return to the marks made

it is not so much demolition as deferral, kids

it all comes back

so in the end I want to circle back,

circle up and say I disagree
that kids are more “creative” than adults, in fact I think the vast majority of all terrific artists
are adults, but what’s true is that the percentage of kids who will make improvisatory poop
out of paper is much higher than the percentage of overall humans who have not been locked
away from art and I would rather be,

on any given day, hanging around with people who are making
poop out of paper than with people who aren’t making art at all. I did of course look up that
Ephesians verse; it said—and I really believe this—that we are made for good works. So I look
around in the empty spring dark at the smoky evergreens,
and listening to the unpacking of chains I say, 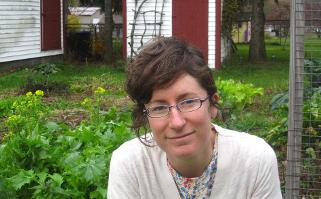 Abby Minor lives in the ridges and valleys of central Pennsylvania, where she works on poems, essays, gardens, quilts, and projects for reproductive justice. The granddaughter of Appalachian tinkerers and Yiddish-speaking New Yorkers, her allegiances lie with vernacular cultures and undercommon artists of all stripes. Awarded Bitch Media's 2018 Writing Fellowship in Sexual Politics, she is the author of the poetry chapbooks Real Words for Inside and Plant Light, Dress Light.