Amy Greene burst onto the scene of Appalachian literature with her first novel, Bloodroot, a sensual and magical multi-generational tale set in East Tennessee.

Greene writes what she knows.  She was born and raised in the foothills of the Smoky Mountains near Russellville, Tennessee. While growing up there, her father, a factory worker, and her mother, who worked tobacco, told her the folklore and legends of the place. She began writing stories about the people of Appalachia as a small child, and never stopped. In high school English class she discovered writers like Carson McCullers, William Faulkner and the Brontë sisters, who inspired her further.

In 2003, with two small children under the age of 8, Greene, then 27, enrolled in Vermont College's low–residency undergraduate program, and left the South for the ﬁrst time on twice yearly trips to the Montpelier campus. It was during her time at Vermont College that she began work on her ﬁrst novel. 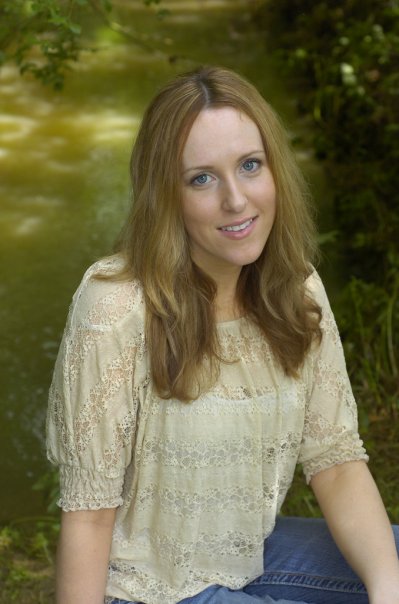 Before graduating with her Bachelor's Degree in early 2008, Greene attended the 2007 Sewanee Writers' Conference on the campus of The University of the South in Sewanee, Tennessee. There she met the writer Jill McCorkle, who introduced her to New York literary agent Leigh Feldman. Only a month later, Greene learned that Bloodroot would be published by one of the most prestigious houses in the world, Alfred A. Knopf.

The novel was an instant success. Bloodroot became a New York Times bestseller as well as an Editor’s Choice pick of the same paper, and was lauded by such literary heavyweights as Wally Lamb, Carolyn Chute, and Arthur Golden. Greene also became a favorite of bookstores throughout the country, although she was always glad to return to her home in the hills of East Tennessee.

Greene lives in Russellville, with her husband, Adam, a freelance sportswriter, and their two children, Taylor and Emma. She is presently finishing up edits on her novel Long Man, about the Tennessee Valley during the Great Depression.

The editors of Still recently sat down to talk about the writing process with Greene, who offers keen insights into the mysteries of creating a good story and writing it well.

Still:  How did your childhood shape you as a writer?  What kind of child were you?

Greene:  I remember being interested in everything and everybody around me as a child. I have vivid memories going all the way back to two years old, so I must have been paying close attention to the world from an early age. I also remember being empathetic, hurting for other people and being sensitive to their moods. I think having that mix of awareness and empathy is part of what it means to be a writer.

Still:  Many writers claim that they felt weird, or separate from others, as children.  Did you experience that?

Greene:  I did feel different growing up, but being an outsider made me an observer, which has served me well as a writer. When I started school it was almost like watching my classmates through a window. There was a loneliness about thinking and seeing like I did. But as I grew older I made peace with my “weirdness,” and somehow that allowed other people to appreciate it, too. I’ve been pleasantly surprised by how my hometown has embraced me, and how proud they seem to be of Bloodroot.

Still:  What's the first book you remember truly loving?  What was it about that book that moved you and spoke to you so much?

Greene:  The first book I fell in love with was Charlotte’s Web by E.B. White. I checked it out from the elementary school library over and over. As strange as it sounds, I had a visceral reaction to the beauty of the words. The language made my mouth water. And it was the first book that ever touched me. It still makes me cry. I learned from Charlotte’s Web that lyricism and emotion are the elements that make a book great.

Still:  Did you have specific teachers or other people who had a big impact on you...people you can look to as directly helping you to become a writer?

Greene:  There were three teachers that impacted my growth as a writer. My first grade teacher was the first person to see talent in me. Most of my first stories, about talking animals and princesses, were written for her. In seventh grade I had another caring teacher who spent time after school reading my writing and encouraging me to share it with others. But the most influential was probably my high school English teacher. He took my writing seriously and never condescended. He gave real criticism and that was a turning point for me, learning to take and use constructive feedback. At one of my last speaking engagements all three of those teachers were there in the same room. It was a special night. I’m still good friends with all of them.

Still:  Your first novel is set very firmly in Appalachia.  Lots of people who grow up in this region say that they didn't even know they were Appalachian until they were adults.  Was that your experience?

Greene:  Growing up, I never thought of home as Appalachia. I think I realized what it means to come from the mountains of East Tennessee, to be Appalachian, when I left in my late twenties to go to college in Vermont. Somehow I needed that kind of distance and perspective to see what I’m a part of, to fully appreciate the sense of isolation and tradition and poverty and folklore that comes with living here.

Still:  You are a person of faith.  A believer, let’s say.  Often writers of faith say that they’ve felt downright ridiculed by other writers and academics who seem to think that believing in God is a sign of stupidity.  Have you had that experience at all, and if so, how do you respond to that?  Does your faith come into play when you're writing?

Greene:  My spirituality does come into play when I’m writing. I feel closer to God when I put pen to paper than I do in church. As John Ames says in Marilynne Robinson’s Gilead, one of my favorite books, “For me, writing has always felt like praying.” I did experience some negative reactions to my beliefs when I went to college in Vermont, my first real exposure to academics and other writers. For the most part being there was overwhelmingly positive, but I did encounter people who formed instant opinions of me based on my accent and my faith. I had someone tell me point blank that he didn’t trust me after I mentioned having gone to Baptist churches. And later, working on Bloodroot, I was asked once—gently—to take out some of the “Jesus.” But I explained how much spirituality, Christianity in particular, is a part of the Appalachia I know and write about. I’ve adopted an attitude of take me as I am or leave me, and being a believer is a significant aspect of who I am.

Still:  The descriptions of the mountains and of nature in Bloodroot are so vivid.  How big a part of your childhood was the natural world?

Greene:  I spent most of my childhood outdoors, exploring the mountain woods around our house. Like writing, spending time with nature made me closer to God. I think those vivid descriptions come from my love of the hills and creeks and fields of home.

Still:  Every writer has his or her own process for writing a novel. You've finished two novels now, so have you figured out a sort of process that you do?

Greene:  The closest thing I have to a process is getting as much of the story as I can down on paper without stopping to edit, so I end up with notebooks full of scribbles that only I can read. Once a skeleton is there, I go back and start adding flesh to the bones.

Still:  Do you ever feel that you are living vicariously through your characters?

Greene:  When I’m into a story with my whole heart, it does feel like I’m living the lives of my characters and having their feelings. I like the sensation of waking up from a dream when I put down my pen. Those are the times I almost don’t care if what I’ve produced is good or not, because no matter what, I experienced the joy of writing it.

Still:  Do you believe in the concept of letting the characters take over when you're writing a novel?  If so, how do you reign them in when they get out of control?

Greene:  Johnny Odom in Bloodroot was one of those characters who tried to take over. I knew Myra was the center of the story, but for a while it became all about Johnny to me. I went off track and had to find my focus again, but I’m not sure I ever fully succeeded. He’s still the most vivid and living character to me, the one I still think about, and maybe still too big of a presence in a book that’s in essence about Myra.

Still:  You’ve said before that you are profoundly affected by music.  Does music make you a better writer, do you think?  Does it help you to write?

Greene:  More than once, music has saved me when I was stuck working on a story, stirring up images in my head and inspiring scenes. When I feel disconnected from what I’m writing, I turn out the lights and listen to something that takes me out of the real world for a while. I would definitely say music has made me a better writer.

Still:  Does a writer from the South and/or Appalachia have a particular responsibility that other writers don’t?

Greene:  I think all writers have a responsibility to write from as pure a place as possible, and to be as truthful as possible, but I think as Appalachian writers its important to consider whether or not we’re perpetuating stereotypes about a region that has been portrayed negatively so often in books and movies and the media in general.

Still:  What’s the best lesson you ever learned about writing?

Greene:  The best lesson I’ve learned is to separate being a writer from being an “Author.” I try to forget about the business of publishing when I close my bedroom door and sit down to write, push aside all my anxieties about book sales and public appearances and what my editor or agent might think, and just get lost in the story I want to tell.