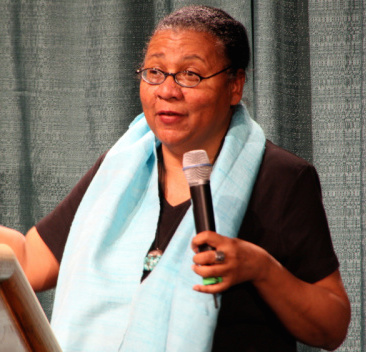 bell hooks was born Gloria Jean Watkins in Hopkinsville, Kentucky but is better known by her pen name, which is in tribute to her maternal great-grandmother, Bell Blair Hooks, and is intentionally not capitalized.  hooks is a feminist, a social activist, and one of our greatest public intellectuals.  Her writing focuses on race, gender, sexuality, capitalism, class, education, and many other important issues.

Her 1981 book Ain’t I A Woman: Black Women and Feminism is widely seen as one of the most important books of the last fifty years.  She has published more than thirty books, including her most recent poetry collection, Appalachian Elegies, which was published in Fall 2012.  She is a winner of the American Book Award, has been named as one of “The 100 Visionaries Who Could Change Your Life” by Utne Reader and has received many other honors.  After living in California, New York, and other places, she has returned to her home state where she has settled in Berea.  At Berea College she serves as a Distinguished Professor in Residence.

Recently our fiction editor, Silas House, conducted an interview with hooks that ran on his radio program, Hillbilly Solid.  You can listen to the entire interview at this link but we have also transcribed a few minutes of this mesmerizing conversation with one of our country’s most acclaimed and renowned writers.

House:  One of my favorite quotes is by Erica Jong:  “To change one’s name is both the act of the poet and the revolutionary.”  Now you changed your name—and I also go by a different name than I went by growing up—and I think it’s very fair to say that you are both a poet and a revolutionary.  How do you respond to that?

hooks:  I respond to that quote by recognizing that names have powers.  The name I was born with really does—Gloria Jean—reflect how much my parents wanted me to be a very feminine, Southern bell type girl, and in order to find my voice and use it, I had to use the name of my great-grandmother…in order to bring a self into being that my parents and my home weren’t nurturing.

hooks:  Well, people forget that early on in the late 60s and early 70s, especially among people engaged with feminism, there was all this talk about getting rid of the ego.  We weren’t just engaged in feminism, we were also engaged in Eastern religions, sexual liberation, and divorcing one’s self from the ego.  Paying attention to who is speaking was politically incorrect; the point was to listen to what people were saying.  So…a lot of people used pseudonyms or different names.  It also had to do with how many of us were not able to name the female lineage we came from.

hooks:  Where I came from, one was hillbilly and proud.  So much of my work is about trying to remind people of the African Americans in the hills of Kentucky…the idea that we would be seen as hillbillies would be like, okay, we’ve arrived, people are recognizing our presence..  Like you, I want to reclaim it but at the same time I am troubled when someone tells me that it is very wounding to them.  I think it is like all the words—like “nigger”, or “dyke”—that we want to hope to shed the poisonous, toxic energy of those words and see if they can be transformed.  And I think there is a lot of hope for “hillbilly”.  And I think the reason we have to hold onto it is that we have to have the counter-hegemonic hillbilly to counter the very foolish vision of hillbillies that continues to be alive and well in our society.  I just wrote a long critique of the film Beasts of the Southern Wild and then I read an incredibly exciting critique by Dudley Cox who is head of the Appalachian theatre, and he likened it to all the images of hillbillies in all the films that have been made that show the little wild kid and that was really deep for me, to see that there is this trajectory.  I feel like we have to deconstruct “hillbilly” and claim it at the same time.

House:  Lots of writers nowadays feel that using a word like “love” is passé, that it’s precious, that they are much too sophisticated and jaded to use that word.  But you have actively used the word “love” in your writing and lectures, and I appreciate that about you.  I wonder how consciously you have chosen to do that.

hooks:  It’s a conscious political choice because when I looked around in the world and I saw  where transformations were taking place, whether it was eco-feminism or environmentalism, I saw that the deepest experiences of change and transformation came where there was love.   I’ve been telling everyone that they need to see A Fierce Green Fire, which is a documentary of the environmental movement.  When you see those young white people in their little boats, putting their bodies between the whales and the harpoons, there is such love there.    It moves you.  I don’t know if there has been a visual experience where I have felt as connected to a white social activist…I was so moved…this is the courage to love that Dr. King talks about, the strength to love…not some Hallmark card kind of love.  This is the transformative kind of love.  This is the kind of love we are going to have to invoke to heal our planet, to heal our souls.

House:  Tell us a little bit about your new book, Appalachian Elegies.

hooks:  I want people to really hear an African American voice claiming Kentucky and claiming belonging.  My critical book that is almost a companion to this poetry book is called Belonging:  A Culture of Place.  I’ve been saying to people, I couldn’t wait to leave Kentucky, partially for me as a black person I thought it was so racist here but eventually I saw that racsim is everywhere and I saw that instead of running away from Kentucky I could run toward it…I came back here to live after living away thirty years…(to help take care of my parents)… but I realized that the kind of childhood I had in the hills of ky were the values that made me, that made bell hooks.

To hear the entire interview, visit Hillbilly Solid on WUKY or at WMMT.

You can read the introduction and the first poem of Appalachian Elegies here.

To learn more about Appalachian Elegies, read this review in The Courier Journal.