Mamie was a military brat whose dad decided to retire "back home," a tall drink of water with a cloud of cotton candy hair and John Lennon glasses. I was a transplant from parts all over, a few years in the desert southwest, a few more in Appalachia, other places I don't remember. Neither of us ever felt like we belonged in a Deep South town where almost everyone else had been born and raised. Add to that, we lived way in the country where the pines, kudzu, and bald blue sky could eat you alive. We were double misfits, two strikes against us - transplants and country kids. I guess that's what drew us together although I don't remember how we actually met
We were rough around the edges, all cockleburs and sumac, walking talking crucifixes warding off fake-sweet Southern belles with Farrah Fawcett hair and football-playing boozers with lecherous grins. We didn’t like being stuck in high  school with its halls full of eyes and stories that changed from mouth to mouth. We’d sneak out under the bleachers every chance we got to smoke, say we got our period and needed to take care of business just to see the men teachers turn red.
Summers we spent a lot of time riding back roads in Mamie’s hand-me-down Chevy truck, leaving a trail of red dust and gravel spit in its wake, Led Zeppelin blasting from an 8-track tape deck we wired to the dash. Sometimes we’d end up at the lake in the next county, park on a hill and watch trapped housewives yell at their snotty-nosed kids and serve egg salad sandwiches and beer to their entitled husbands and swear we’d never be like them. We pinkie promised that one day we’d change the road we were on just like the song said.
Time passed while we sewed patches on our flares and embroidered our peasant tops, beaded chokers and earrings, spent the money we made ironing our daddy’s uniforms on platform shoes and black light posters. We never missed The Sonny and Cher Comedy Hour mainly because Cher looked like us with her crooked teeth and long nose and came from working class people. She was ordinary and cool and we felt a kinship. She showed us we could say out loud what we thought about stupid men like Sonny.
On nights when our uneasy lit a fever in our bellies, we’d sneak out and meet two older guys in the barn behind her house, smoke some weed and make out, push our limits past caring. After the boys left we’d let the horses out of their stables and ride bareback under the moon, howl in the woods like lost souls, hooves beating the dirty off our skin.
But year after year of same and nothing wears a girl down and one day she left without me. I had a man I loved by then that talked me out of going, too, but I saw her off at the bus station. As the doors closed with a whoosh and a thud, she looked back one last time, the cold blue of her eyes startling in the Mississippi heat. Then she moved on down the aisle, her cotton candy hair floating from window to window, a silent movie reel with an unscripted ending. 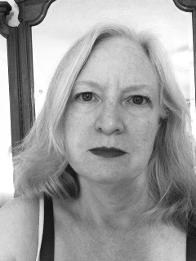 Charlotte Hamrick’s poetry, prose, and photography has been published in numerous online and print journals, recently including Emerge Journal, Flash Frontier and New World Writing. She’s had nominations for the Pushcart Prize, Best Microfiction 2021, and was a Finalist for Micro Madness 2020. She is Creative Nonfiction Editor for The Citron Review and was the former CNF Editor for Barren Magazine. She lives in New Orleans with her husband and a menagerie of rescued pets where she sometimes does things other than read and write.