Five Poems by Danni Quintos
All Filipina Women Are Beautiful
an old man with white hair says
to my brown, full-lipped face & I don’t
know why, but it doesn’t feel like a compliment.
When he says this, we’re at the airport,
bags packed for a three-day flight & maybe
he’s just asked Where to? I’m about four,
with crooked bangs & buck-teeth, my lola
holding my hand in all the long lines. Maybe
she just smiles or thanks the man, after all
we all want to be maganda like the Filipina
Barbie on a friend’s tall shelf: hair swept
into a shellacked knot, gold beaded dress
& her tiny waist clipped into the plastic stand.
I, too, think all Filipina women are beautiful
or should be, are supposed to be a certain kind
of beautiful like this Barbie, or photos I’ve seen
of Imelda with the same stiff wings
as sleeves. But they are not the same brown
-armed Filipina women I know that play pekwa
with my lola & bring fields of pancit, or the titas
in slippers taking jeepneys in the shadow
of a volcano. Instead, these beauties are fair
as the flesh crayon I use to color in everyone,
their lips painted pink, their eyes smoky
& tilted just so. And maybe I carry this with me
for years, watching Miss America pageants,
flipping through teen magazines, never seeing
myself, but watching my reflection
in the car’s side-mirror, trying to tuck in my lips,
fold them against my teeth, thinner,
like the other girls at my school,
like the girls I see everywhere.

Who I Wanted To Be Instead
My favorite shirt used to be
a polyester button-up
that looked like a wet oil painting
of a rainbow, stirred in circles.
I wore it to feel cool until
a North Carolina beach trip
with my older cousin
showed me what a baby
I was. She wore thin
camisoles with lace around
the cleavage, jeans so tight
they creaked when she bent
over & here I was, Professor
Psychedelic, eleven years old
still trying to figure out
how to wear eyeliner.
We walked to Wal-mart
& bought Something
About Mary & after watching
it in the nighttime basement,
I wished I could just be
like my cousin, smoking secret
cigarettes with gangly boys
under the dock, or like Cameron Diaz:
so cool she could swipe
cum in her hair & look cute,
so cute men did long-cons
for her affection. I blew out
candles for years, wishing
to be like her, blonde & braless,
everyone smiling, pining
for my attention.

Boobs
In 5th grade gym class I ran into the padded walls
and felt like marbles bruised me under my shirt. That night
I dreamt they were big & flouncy and I looked at myself
in a mirror, laughing. In a field at recess I did a cartwheel
and Elliott Fess saw my shirt fly up to my chin. I’d forgotten
we were different now. When I asked, did you see anything?
he said, just two brown dots. I wanted him to feel embarrassed
or changed by the sight of me. Or maybe to see me as a girl, a body.
In high school I was crazy for my boyfriend who never tried
to push his palm to my bra, even an accidental thumb didn’t
graze me. I wondered if there was something wrong with them:
the shape, the size, did I wear the wrong bra? He guilt-prayed
for forgiveness during youth group worship with his palms
raised to the ceiling, trying to erase those afternoons of just kissing
& nothing else but friction: our bodies trying to get loose
from their husks, out of breath with all our clothes on, his mother
down the hall, and Jesus watching the whole time. A couple years later,
his best friend was the first boy to touch any part of me, to peel
my clothes from me & see more than just two brown dots. A secret
we kept in our breast pockets, the ways our bodies betrayed us.

Sixth Grade Invisibility Studies
Somehow my new blue jean flares
became high-waters & everyone could see
my babyish purple socks. My glasses got crooked
on my face, my hips spread wide & I started
to bleed through my pants unpredictably.
This is when I tried to erase myself, pushed
my limp hair in front of my eyes to become
invisible. A boy in art class called me the N-word
& smiled. I wanted to disappear & steal his backpack,
dump it out the window, math book & pencils spilling
in the courtyard where only birds could get in.
In orchestra class my bow sawed the wrong way
during the moonlight sonata, my notes
too flat or too sharp. The teacher made me
play alone: imagine a violin floating in the air,
squeaking. I got caught passing a note in Social Studies,
triangle folded & flicked across a table, I was made
an example of, a 500-word essay that no one wanted
to write. I ran slowest in gym class, little legs pumping,
a full lap behind the athletic older girls who took the tights
from my locker & tied them in a knot like a flag
up high. I pretended it wasn’t my locker, pressed my back
against the metal gills & tried not to breathe. All the eyes
watching the empty legs waving in imaginary wind. I waited
for everyone to change back into their Old Navy shirts
& Gap jeans, gather their hair into ponytails & leave.
The bell rang in the empty locker room, I untied the knot
& slipped my invisible feet in, like a jellyfish’s translucent
& stinging tentacles, like its empty
head, a plastic bag.


The Worst Part of Riding the Bus
Hailey McCourt
was murdered.
After her body
was found in the park
by a little boy looking
for his ball, we all said
nice things about her,
pretended she was
the nicest girl
on the bus, our best friend.
Before that, she was missing.
Last seen on her bike
according to
announcements,
but those who knew her
knew she was last seen
giving her mother
the finger,
last seen poking me
in the back
on the bus, last seen:
her face covered
in pink pimples,
her teeth sharp as an angry
dog’s, her little sister
rolling her eyes & screaming
Shut up, Hailey!
Last seen flirting
with my 6th grade boyfriend
& asking me if I was
Mexican & illegal.
When her curly
blonde & snarling head
didn’t appear
on the school bus steps,
we sighed
letting all the balloons
in our lungs go. 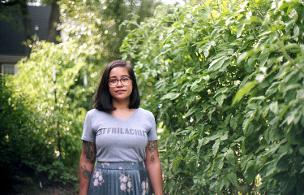 Danni Quintos is a Kentuckian, a mom, an educator, and an Affrilachian Poet. She received her MFA in Poetry from Indiana University, where she taught Creative Writing and served as an Associate Poetry Editor for Indiana Review. Her work has appeared or is forthcoming in Day One, Pluck!, Best New Poets 2015, Salon, Cream City Review, Cincinnati Review’s miCRo and elsewhere. Danni is the author of PYTHON (Argus House, 2017), an ekphrastic chapbook featuring photography by Shelli Quintos.