Daddy's breath comes out in battleship puffs ahead of me on our way down the path this morning. "Time to cull the chickens," he says without turning around. "Cull" is how Daddy pronounces "kill."

We’ll cull the three oldest hens who don’t lay many eggs anymore. They lived cheap all summer eating bugs out of the yard. But chickens have to eat all year-round, and there aren’t many bugs to scratch up in the winter.
Daddy told me not to name the laying hens, because it’s harder to cull a pet. The problem is when you learn to tell animals apart, names come all on their own. One is all speckles, another is dark brown and small as a teapot. The oldest is brown, too, and big as a kettle – she is the mother of the others. They take turns sitting on my lap, letting me pet their different feathers down flat. I know them apart, and so they have names whether I say them or not. They cluck at me like I am a chick with a name they have accidentally given me, too.
The chicken coop is a gray wooden shed at the back of the yard. The chickens live among rusted farm equipment so old I have no memory of its use before it was a perch for birds. The shed is surrounded by wire on all sides. After we brought home our first batch of chickens from the Tractor Supply store, Daddy threw fencing over the shed roof to make it safe. He buried the ends of the wire roll into the ground to keep varmints out. Dogs, cats, coyotes, weasels, even hawks – so many animals know chickens and their eggs are easy meals. The varmints tested the fencing and Daddy improved on his fortifications with each assault.
The chickens hear us tramp down the mud path. The path has its own sound, having been beat firm by our boots each day for years. On cold mornings, the mud turns to a black glass and I often slip on the path. This time, I fall and bust my tailbone. Daddy limps carefully ahead of me with the metal feed bucket full of potato peelings, cornmeal, and other house-warm scraps that the chickens bicker over. He doesn’t turn around, and maybe doesn’t hear me whimper. It spooks the chickens when I cry, so I don’t.
The middle of the shed is crowded with a tractor disc harrow that was disassembled and turned vertically by someone very strong very long ago. The disc blades meet me at my ankles, knees, belly, and neck. When we enter the shed, the hens flap from the rafters down onto the discs to inspect my eyes, heart, wobbly legs. I turn away so they can’t see what I’m thinking about.
“They had a good long run of it,” Daddy says. I look back out at the yard where they ran with me.

Lots of people know a chicken runs around after its head is cut off, but they never see it happen. It seems like it would be funny but isn’t – the way old cartoons are supposed to be funny but aren’t. I don’t laugh at old cartoons, and Daddy says it’s because I don’t get the jokes.

“You take after your Momma,” Daddy says. Momma doesn’t laugh much, even when she’s tickled. I stand a little straighter so my ribs are tough like hers, and then I’m not as fun to tickle.

A chicken with its head cut off is not as funny as Daddy acts like it is after he brings down the ax. But the other chickens flock and cackle like they think it’s funny, too. Chickens are like people, I think. They fly into a frenzy at death, and panic looks like a fit of laughter. I know that’s why Daddy laughs when he talks about Vietnam. Maybe that’s why people laugh at cartoon animals blackening their heads with shotgun blasts, too.
“You take after your Momma,” Daddy says. Momma doesn’t laugh much, even when she’s tickled. I stand a little straighter so my ribs are tough like hers, and then I’m not as fun to tickle.
I want to be like Momma with her perfect stone face. When Daddy laughs at the television, Momma walks away. So I do, too.

When cartoons are on, I count the background trees repeating. I used to think backgrounds ran on a little belt inside the television box. Maybe the chickens see the sky going around outside and it seems the same. On television, magic tricks take us by surprise. Maybe it’s the same in the shed. Life in a chicken coop must feel like a cartoon in a television box. There’s not enough room to explain all the life and death that happens in that tiny frame, while the sun goes around on its conveyer belt outside. It must feel like things happen by magic.
Weasels can kill chickens magically, without even touching them. They can tunnel under the wire and the chickens smother each other in a cackling trance all crowded up in the corner. One cackling chicken can set off the whole flock.
We stand in the coop as Daddy decides which chickens to cull. He doesn’t know them apart as well as I do. He doesn’t know my speckled, brown teapot and old mother kettle hens by their clucks. The chickens know him, though. They see him flex his hands.
One skinny rooster panics, and before its squawking stirs up the other birds, Daddy snatches it by the neck. And then he spins it. He separates the head from the body of the rooster without even using an ax. Just like that, he’s turned a bird into a food. A rooster has been transformed into a fryer.
“For my next trick,” he says, like a magician on television, “I will saw a woman in half.” He bows, flourishing the rooster body like a wilted bouquet, and laughs. The old hens start to cluck. I reach over to pet down the feathers of my Old Mother Kettle, and she shrinks from my touch.

We tote the hens up the mud path to the bare patch at the back of the house where Daddy chops wood. I set out a pan with mealy worm-filled rice to keep them happy while Momma carries out the scalding pot and chairs. With a chuckle, Daddy flops the rooster onto Momma’s lap like it’s a rubber chicken prop. Then he rolls up a round of tree stump and pounds two nails about an inch apart into the flat top. Every crack of his hammer ruffles the feathers of the hens, but they go back to scratching in the scrap pan when he’s done.
Momma has the rooster by the feet and stirs the scalding water with him. She plucks and guts him in a matter of seconds. Then she is ready.
Old Mother Kettle is first. Daddy sweeps her feet together and pulls her into the air upside down. I know she’s never been held like that before. She opens her beak in confusion.
But Daddy is fast. In a blink he’s mashed her neck between the nails. She flaps her wings in a backstroke against the stump for only a few seconds. Then the ax blade has set her body free to join her daughters in a final run through the wood chips. A squirt of blood douses the feathers of the speckled hen, who is next. Daddy laughs at the race. “Where do you think you’re going?” he says.
Momma grabs the headless hen and smooths her wings down. Into the scalding pot she goes. Daddy’s ax comes down again and Speckles flaps across the sawdust, blind, the way a moth powders itself against my window at night. Momma catches her, soothing her into the water. Brown Teapot’s turn has come. She squawks the loudest, though no one is left to understand her except me. “Nothing but feathers on this bird,” Daddy says. But he chops just the same.
Momma pulls Old Mother Kettle up by the feet and gives her steaming tail feathers a pull. She plucks the slick brown feathers by the handful. Then she snaps the feet off like twigs, swivels a blade around the top and bottom of the body, and the hen is ready for gutting.
Momma hands the warm mound over to me. My small hand delves into the neck.
Daddy wants the giblets saved. I loosen all the soft bits and they glide out along my flattened palm into a tub. I can feel the rice still in the hen’s crop.
When a yolk comes out with her intestines, I think how this hen made me eggs to eat every morning, just like this.
Quietly forming rich yellow yolks in her warm belly, building eggs and shells to be taken from her roost every morning, to feed me.
I show Momma the dandelion-colored smear on my fingers but she doesn’t say anything. She’s already plucking a great drift of speckled feathers to ready the next bird for my hand.
When chickens are culled, they become a singular object: chicken to clean, quarter, and put away for winter. They aren’t pets. They don’t even have feathers to pet anymore. Soon they’ll be bagged by breast or thigh, and we won’t know which part belonged to which old hen.
Daddy is leaning on his ax handle smoking a cigarette, smiling like a gameshow host. He is happy we have meat. Momma has her stone face on, and I put mine on, too. “You’re no fun,” Daddy says. He kicks wood chips over the blood at his feet. 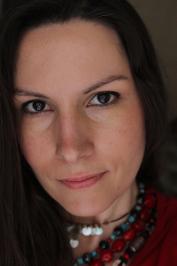 Edie Meade is a writer, visual artist, and mother of four boys in Huntington, West Virginia. She is passionate about literacy and collects books like they’re going out of style. Say hi on Twitter @ediemeade