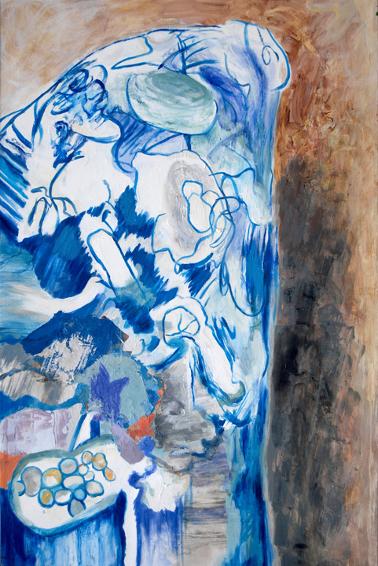 Still: The Journal is honored to bring you this portfolio of work from Russell Weedman, who has been making art in Whitley County, Kentucky since he was a child. His father taught in the Art Department at University of the Cumberlands; his mother was an officer in the academic affairs office at the college. Russell earned a BA in Art from Centre College in 1985. He completed an MFA in Painting and Drawing at Stony Brook University in 1989. Shortly after, he returned to Williamsburg and began his teaching career at UC.
Russell's work has been featured in both solo and group exhibitions throughout Kentucky, Indiana, and Virginia. He was presented the Mildred and David Ward Art Prize at Centre College in 1985, the Thayer Award from SUNY in 1989, and has received a Professional Assistance Grant and was twice awarded the Al Smith Fellowship from the Kentucky Arts Council. He has been a full time faculty member in the Art Department of the University of the Cumberlands for 23 years. He currently serves as chair of the department.

Russell is most well-known as a painter, usually working in oils, watercolors, and graphite to create his signature abstract paintings that capture the relationships between nature and the human form. One critic noted that his work "also brings into play ideas on chaos and order." Russell is also a photographer and a talented musician.

More of Russell Weedman's paintings can be seen at his website.

My works have a strong connection to the human figure and nature. The forms are meant to suggest many things at once. The sensuality of the images is a result of my predilection for the physical qualities I respond to in the world around me and my psychological response to it. The oppositions of movement and stasis, beauty and violence, monochrome and color are very important elements in these works. The strong emphasis on the use of color, as well as grisaille, is directly linked to my drive to enhance these contrasts and create a lush visual experience for the viewer.

Often created through a combination of media, I constantly transform my images through manipulating the format, reworking the surfaces, and revising the imagery. The combination of this kind of ad hoc process and my initial impulses to make an image yields a very liberal marriage between abstraction and representation. For me, making art involves a delicate balance between visual and intellectual inquiry, emotional sensitivity, and a strong use of materials.