Jefferson McGraw made a bargain with God, so the family legend goes. He’d give up his vices—all of the gambling and the drinking and the women—in exchange for his daughter Tinsey’s life. I picture him posing the question with a certain amount of swagger, as if he were talking to his poker buddies—What do you say we make us a deal?  He had not yet read enough scripture to know the consequences of this request, that in striking this deal he would become yet another incarnation of the biblical fool.

He would be Jephthah, who made the following proposal while battling the Ammonites: If you bring me victory, Lord, I will sacrifice to you the first to greet me upon my return. Jephthah was granted his victory, and his only daughter welcomed him home from war.

The Lord has no pleasure in fools. But Jefferson kept his vow.

In the year that he became a preacher his daughter died anyway, the leukemia that had gone into remission as if to fulfill God’s end of the bargain returned to claim her. She was eleven years old.

I like to think that he was tormented by the memory of his daughter. I like to think she haunted him. Like Jephthah’s daughter wailing in the mountains, perhaps she cried to him in the night.

I thought about my great grandfather Jefferson while pregnant with my son, thought about how easily we are lured into bargaining with another person’s life. When the doctor led me into that private room with my husband to say that something looked wrong with our son’s heart, despite its comforting steady whoosh on the Doppler, did I make promises? Beg for a healthy child? I only remember staring at the white wall behind the doctor as she drew pictures of the cardiac anatomy, feeling insulted by her crude drawings, that motherly tone. “I don’t need an anatomy lesson,” I told her. My husband touched my arm. “I need to know what you can do.”

Nothing. There was nothing to be done but have the cardiologist take a closer look. At best, the concern was unfounded, a mistake in the imaging. At worst, our son would require surgery.

You are trying to trick me into making that bargain I thought. My faith was in medicine, not in miracles, but there in that room, I learned that medicine was complicit in miracles. I was told to pray for intercession. Lord, let my son be well and
I . . .

What? There was nothing I would not have wagered for my son’s life. But in the recesses of my memory was Jefferson’s story, a personal parable. The Lord is capricious and does what He will. Instead, I wagered nothing.

And when the cardiologist declared that my son’s heart was perfect, I gave thanks to the plaster on the ceiling.

The bargain for Tinsey’s life failed in the eyes of everyone but Jefferson, who believed in the strange and mysterious ways of the Lord and never questioned this turn of fate. The rest of the family packed away her memory and went on living.

One photograph is all that remains of her. In it, she is gaunt and pale and old with the wisdom of impending death. As a child, her picture used to terrify me. It terrifies me still, to look at her and think of my son at her age, of seeing that horrible wisdom in his eyes. I look at her and think back to that ultrasound, understanding the desperation that led to Jefferson’s conversion.

I review Tinsey’s photo, the single artifact. It says nothing about her, this miraculous child, who vanquished the Devil and returned him to God. I want to elect her to sainthood, have her glorified in heaven, but with what? With only a photograph to prove her existence. With a name hardly whispered after her death.

Surely there must be something more. I sift through the photographs until I find her again. Maybe she is there, in the picture of her parents, my great-grandparents. That milky haze next to Jefferson’s face. Something nascent, like a spirit’s rising. Perhaps the mark is nothing—an artifact—that orb a quirk of light, a speck of dust on the negative.

In the end, we are reduced to simple artifacts: a lock of hair, a photograph, old letters in a cigar box. Evidence of a life once lived. How easily we are summed up by these things, imperfectly preserved.

I have Jefferson’s bible, worn until the binding broke, Tinsey’s picture tucked inside. Somewhere, someone has the remnants of his life before God—his poker chips, a whisky flask.

I have a sonogram of my son, an early one, with those errant spots that had caused so much concern. Every now and then I hold that image and hope that it was an error, hope that the hundreds of pictures of toothless grins and chubby legs are the truth.

I look for Tinsey where she does not exist, in photographs taken long after her death. But we see what we will, specters of memory resurrected from those crystals of silver halide, in those stray artifacts. Images appear and fade. We accept the ones we want to see, never quite knowing which are real and which are imagined. 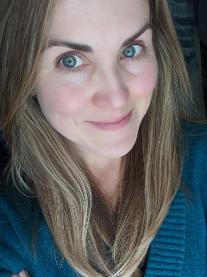 Joanna Manning is a graduate of Syracuse University and the Rainier Writing Workshop. Her work has been featured in Iron Horse Literary Review, Tahoma Literary Review, Water~Stone Review, and others. Her debut essay collection is Now I Understand You (Subduction Zone Press, 2022).