This is the year my mother died. In so many ways.
And where do I begin with a story like that? A story beneath the story beneath the story beneath?
A story going all the way back. How far back do we take it?
On June 24th, 2022, the United States Supreme Court overturned Roe v. Wade and a woman’s right to an abortion.
I loved my mother. Sometimes, I thought I hated her. I didn’t. But I believed I could be different and didn’t understand her choices until I did.
My mother chose to stay with my father even when he betrayed her.
But you see, that’s why this story goes back.
All the way back to the alleged first woman, to Eve in the garden.
And didn’t Adam betray her?

A year before she died, my mother came to me in spirit. She could not come in body because she was ninety-two and frail and, as they said, had dementia.
But did she?

One day, as I spoke to her via phone after her dementia worsened, she said, “It’s too much. There’s not enough room, nowhere to put it.” I think she was trying to explain something she had said to me before her mind had completely deteriorated. Before they put a name to it. Dementia.
It took most of my life for me to get angry, understand my role in the family, and resign from it. My father and siblings scapegoated, discounted, ridiculed, and called me crazy. But Mom didn’t. Still, to distance myself from them, I had to let her go too. Enmeshed as they are, it was a package deal. In the beginning, when I first began turning down family invitations, she called me.
“I know something’s wrong,” she said, “But I don’t want to know what.”
That helped me more than she could know. The truth is that it never did seem like she wanted to know what was wrong. And now I don’t blame her. Because what’s wrong, what was truly wrong, couldn’t be fixed. She didn’t have the means to do it. I felt abandoned and angry, but it helped me to cut the family loose. And I needed to. Badly. I thought I was mad at her then, or I wanted to be. I thought I was angry at her for not wanting to know, but mostly, I was sad.
Later, in the grip of her dementia, when she tried to explain to me how she didn’t have anywhere to put it all, that’s what she wanted me to know, why she had said, “I don’t want to know.” She had reached her capacity to know. She knew enough to try to tell me; it wasn’t that she didn’t care.
In her so-called demented state, she began to say things that helped me and brought me to what I now understand. It wasn’t that she didn’t want to know what was wrong that day; it was that she couldn’t hold it. Not one more thing. There was no place to put it.

She didn’t have dementia. Does anyone? She had trauma.
She lived a life—a long one-- in a woman’s body.

On the day of her spirit visitation, a morning in May, a year before her body expired, I awoke with a strong awareness, a presence. Gentle energy moved within, spiraling through me. Soft and beautiful, exquisite.
I recognized her at once. My mother! But my mother as I first knew her.
What is recognition? Recognition comes from the Latin root word “re,” which means “again,” and “cognoscere,” which means “to know – literally, “to know again,” or “to identify.”
I was alone in my bedroom, but she had joined me.

In her sixties, she had undergone hip surgery and suffered post-surgical dementia.
She recovered or seemed to. My family said she was entirely herself again. But I disagreed. I asked my father, and he assured me she was okay, back to normal. And it seemed like it. She said all the right things; her laugh was the same. But my mother was missing. And I was the only one in the family who seemed to notice. Our connection seemed off, even severed.
I believe she compensated from the time of that surgery until twenty years later when she could no longer hide her essential absence and slipped thoroughly away from memory.

That morning in May, in my bedroom, she was back. In presence. The mother I knew.
Delicious energy like nectar flowed through me. She didn’t need words to tell me it was her. That she was with me, had always been, would always be.
“It’s me,” it seemed she said. I knew. I knew then. My mother knew that I would know, that I would recognize the release of her spirit into the everything, that I’d know her voice, even disembodied. That was part of our connection.
Her presence and return, as I had known her all my life before the hip surgery and delirium, filled me with delight, relief, and bliss. It was my mother, returned to me.
Her body was thirty miles away in Brighton, where she lived with my father. Alive. But she was free, no longer confined to her body. She wanted me to know. I went outside to the backyard to drink my morning coffee, and she came with me to drink her imagined tea, her spirit all around and in and through me.
We stayed like that for hours. She was everywhere. In the treetops, the birdsong, the pond with its waterfall flowing, in the air. 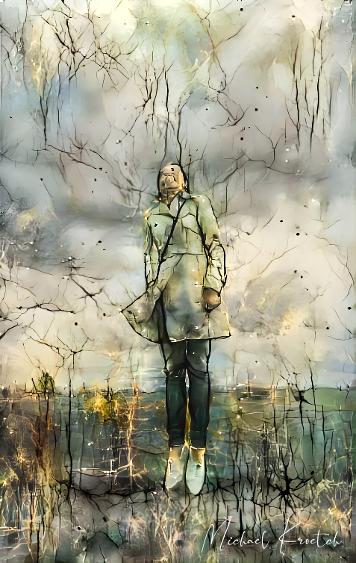 A year later—I  don’t think it’s a coincidence—also in May, my estranged daughter, the eldest of two, returned to me, two months before my mother died in early August. My daughter was returned to me, as my mother had been, and I, to them.
I went to my mother’s bedside only once as she was dying. Because of her visitation in spirit in May the year prior, I knew she had already left her body, that she was everywhere; she was with me and always would be; I was at peace. I felt no sorrow to see her body leaving. She had already told me she wasn’t confined to it. She was free. My sisters were grieving, but I was not. I lightly touched her beautiful face, her hair.
The eldest had been to visit in June, but my youngest needed to see her grandma, and I went for her that day. My mama and I were good, and I did not want to join the family drama, but I went anyway for my girl. “She’s in the treetops,” I whispered over FaceTime, “She’s everywhere.”
My daughter wept from a thousand miles away. “We love you, Grandma,” she cried. Mom was sleeping peacefully. She looked beautiful and rested.
Writing about it takes me out of the pain and rage I’ve been feeling since June 24th and the decision handed down by SCOTUS. There she is, I think—my mother, here to comfort me.
THE mother. There’s a song Patty Griffin and others sing, “Mary,” which was my mother’s name. Her mother, my grandmother, coincidentally, was named Madelaine, and this Mary of which they sing was Jesus’ lover, known as Madelaine in France. “Even when the night lifts, she’s always there.” Griffin sings of this Mary, this one who stays.

My mother introduced me to her. Mary Magdalene.
Jesus tells Mary, “I couldn't stay another day longer; he flies right by and leaves a kiss upon her cheek.” And I felt like that, I told my mother silently, from the day she came in spirit until we buried her body.
“Mom,” I say. “I couldn't stay another day longer.” And she whispers against my cheek in the breeze. She says, “I know, my daughter. I know.”
“Fly,” she tells me. High up, the tops of the trees sway. A bird does a pirouette against the clouds and the sky, then swoops in, a branch dips.
“You’re covered in secrets,” Patty Griffin sings. And she was, my mother.
Aren’t we all?

Let me tell you a secret. The secret of being female means keeping secrets. Being female means going underground, living surreptitiously through others, holding all of space inside your own small heart and head, and a mind that one day will crack from holding the cosmos together. And they’ll call it dementia.
It wasn’t. “I don’t have a place for it all,” my mom had said. “There’s not enough room.”
That’s what I would say to SCOTUS if they’d listen. If my voice mattered. “There’s not enough room.”
The earth itself would say the same. I can’t stay another day longer, I say. “Fly,” my mother smiles.
“There’s no more room,” I would say to the six members of SCOTUS who took away my descendants' right to reproductive health care, self-determination, to choose, should those six justices listen.
“There’s nowhere left to put what’s wrong,” I’d say, “No way to hold it all.”
And then I’d leave this body they say belongs to them.
“Fly,” my mother smiles, and the earth breathes her. 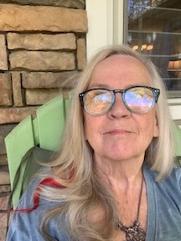 Kelly Thompson is currently working on a memoir tentatively entitled Rupture, the story of one woman's journey of single teenage motherhood and out of her family's fundamentalist cult. Her work has been published or anthologized in BOMB, LARB, Guernica, Electric Literature, Entropy, Oh Comely, Dove Tales, The Rumpus, Proximity, The Writing Disorder, Witchcraft, Manifest Station, 49 Writers, and other literary journals. She is the editor and curator for the “Voices on Addiction” column at The Rumpus. Kelly lives in Denver, Colorado in the sunshine of the spirit. You can follow her on Twitter @stareenite or Instagram @kellyblog.

Michael Kroetch’s cross-disciplinary art has received international awards and funding, as well as being collected by some of the finest institutions—including the Los Angeles County Art Museum, the Art Institute of Chicago, Berlin’s Momentum Gallery, and the American Film Institute. His work has been exhibited in New York, Los Angeles, Oslo, Berlin, Seattle, Portland, San Francisco, and Washington, D.C., among other places. His large panels are acclaimed for their wonderful color, freshness and luminosity, but his smaller pieces are also sought after for their intimate use of detail.