Six Poems by makalani bandele
unit_25,
a corner unit
the ball bounced home alone. how do you sneak outta a archive? somebody's
tripping, you can smell the slow contrition. resident auteur. the strange, hardly
audible humming in the eaves. yo, yo, run yo shit (‘fore it's too late).
on average, black families have about one-tenth the net worth of white
families. a faint bruise's green (on white skin). strung out. the studio side door of it.
chile, please get somewhere and sit down.
it's too late to run ball, when all your homies done bounced out of existence.
the waves leaped over the faces of the shore. the grass is white in the changing room.
keep a low-light profile. we call ‘em “one-time*,” because you look one time, as
doing a double-take or lookin’ too hard at ‘em might draw their attention.

__
*Slang for the police. Chiefly heard in Southwest Atlanta, GA.

unit_73
first off, can i just say, they fits and they soft? the law show up tricky,
discriminating and indiscriminately shooting. though representation necessitates a
kind of absence, is everybody happy? the empty street suggests the end of public
debate when we are trying to have a discussion here. opticality, or toward a bluish
cast in overcast skies. wind of leaves. find the other. branch whispers up and down to
branch just below it. the many fictive planes of depth bemuse. from the get-go,
windows fell out of the trees. now is the time to unearth your self that is beyond
discourse itself. to leave off and not know the first or third about how to read one
another softer in gusts. there goes the neighborhood. you could just get down now
and ask questions later, but that might not be prudent. nothing could be further from
the sauce, but we ready. you nasty, baby.
unit_22
the pleasure derived from stimulated rods and cones. dippin' and dappin' and
don't know what's happenin'. must be mighty white to be able to yell in the face of
cops with a long gun strapped to your back. aint nuthin’ sweet in the pantry. black
women experience a heightened awareness of their difference in the workplace which
manifests itself in disruption of sleep patterns, irritability and a lack of patience in
their home life, reduction of their sense of “psychological safety,” and diminishment
of their ability to contribute fully at work. style before substance is nice work, if you
can get it. we baggin' it up in here so make sure the door’s closed. lawd have mercy,
give me the strength to not strangle this boy. do you wanna ride or die?* gotta
breathe and move through it my nicca.
whatchall doing with all them buckets in the back? this the substance of
pleasure in a style you can get nice with. anything is music as long as you apply
certain principles of organization to it. yeast is only ten percent of bread, but it won't
rise without it. don’t front. going out back to take care of a little business.
___
* 2Pac. Lyrics to “Hail Mary”. Genius, 2019.
unit_64 is vacant
who left the damn toilet seat up? broaden your temporal lobes a bit. the
streets are cold grammar and hardly take you where you want to go. trying to get the
slang outta ya throat. it isn't a race. a playa in houston buckin’ seven, eleven, on
twenty straight rolls can cause a butterfly to get put on the stroll in shenzhen. passing
conversation about passing, erasure, and which comes first. turn the party out.
stimulating interest as a means of furthering investigation. the creek is frozen over
and makes for stairs that are long and slippery. extraordinary's beatific stink. cause
houston left and went straight to the toilet, all the playas only want to be butterfly
now. finna show you about kids nowdays. every once in a while, a pagoda comes along
that sounds familiar, but when you come to, you have no idea where you are at.
jopappy can barely string two sentences together. wolf tickets, get your wolf tickets.
unit_88
the markets can remain irrational longer than music can remain energetic. her
only advice: never ride dirty on a budget. only eye to tangle with. if you froggy, then
leap mofo. she lost the fight with sleep and dozed off in the middle of his struggle
with relevance. did words get in the way of the constantly shifting light through the
swaying tree? her task was to rigorously critique these representations. it's just one of
them thangs, don't take it personal. the snapdragons are extensive rooms of fragrant
yellow light. don't look up now, but she’s caught in an infinite loop of falling. the sky
is falling with her and the sentence-makers. words shift and low-key market
themselves as irrational swaying in the light, that’s how you know. there is a presence
without presence there. who is speaking? put up or shut up. the dead lecturer always
takes the slow train home.
unit_82,
give or take a few meters
hot and poppin' like fish grease. hello, world. african americans are twenty-one
percent more likely to receive mandatory-minimum sentences than white defendants
and are twenty percent more likely to be sentenced to prison. swallowed hard, then
sniped the alley. he did his time on one foot and shut his mouth when he had to.
coiffe your divergent, different desires in resistance to the cultivation of
monocultures. the space you take up in the world is coded not neutral and has
valences with purchase. dull, unpolished pain from a shank as it guts. how long do you
have to practice cruelty before you perfect it exonerating the cops who with a
nightstick sodomized to death a black boy in handcuffs? the black eye left the sky
unfinished, because it was always looking for a black body to think about. you
wouldn't know it by the swag, but lil' nico's a vessel of flight by now. with divergent
cultivation, them girls desire to be instant as hot grease when some resistance is
poppin' off. cue the 808's. half-ass short ribs lost in the sauce. the things we disagree
not to hear. what difference does it make in the end?

A note from the poet on “the unit”:
These poems are in a prose poem form I invented called “the unit,” inspired by virtuoso pianist and composer Cecil Taylor's groundbreaking 1966 album, Unit Structures, in so far as it desires to embody the feel of collective improvisation in Free Jazz. Even as a prose form, “the unit” approaches the lyric with the precision and abandon of an instrumentalist free improvising. The foundation of the form is Ron Silliman’s poetic device, the New Sentence. Each poem should be thought of as a musical conversation between instruments not bound by corresponding rhythms, or time signatures, conventional melody, or harmonics. It seems (sounds) like a bunch of noise (nonsense) as the New Sentences talk at, talk over, talk around, talk indirectly about, completely ignore, and suggest other narrative or philosophical directions for the New Sentence(s) prior to it or after it. Thus, there is a marked polyvocality to poems in this form and speaker, subject, meaning, and even tone are constantly shifting. These New Sentences are organized by how they sound against (with) one another as much as by how they might relate to each other semantically. The rules for the form are simple: sixteen New Sentences or sixteen bars, if you will. Some of the words in the first New Sentence and the sixth are combined to make up the twelfth New Sentence. 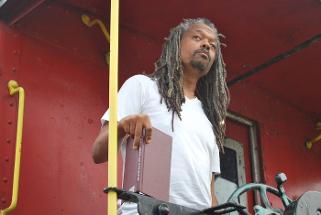 makalani bandele is an Affrilachian Poet. His work has been published in several anthologies and widely in print and online journals. He is the author of under the aegis of a winged mind, awarded the 2019 Autumn House Press Poetry Prize. The poems appearing here belong to an unpublished manuscript entitled, vandals of knock city. Other poems from the manuscript have been published or are forthcoming in Ocean State Review, Inverted Syntax, and Posit. makalani recently read poems and reflected on Black History Month for Writers & Books.