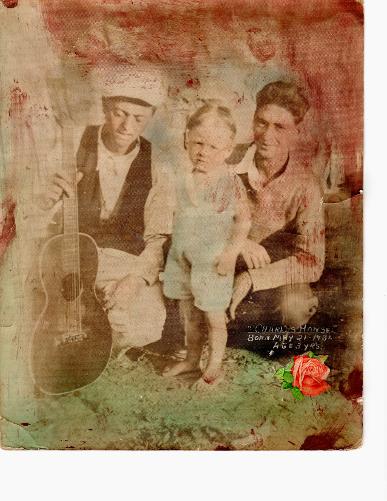 My father’s photograph arrived before Christmas, a gift from a cousin, twice removed and once met. A rare childhood picture, made all the more remarkable in its inclusion of my father’s father, whom I remember seeing only in his coffin—a faded, smoky memory—and an uncle, Taylor, whose name was merely legend, having been murdered before my birth.

“Note the rose in the corner,” the cousin wrote—a rose decal below my father’s name, birth date and age. The photo has been tinted, its background painted over in swirling mauves, blues, green and tan.

My father—“Charles Hansel, born May 21, 1931, age 3 yrs”— called Charlie-boy, stands barefoot on green tinted ground, his small feet so like the larger ones I remember, arching elegant with long slim toes. He is wearing light blue jumpered shorts. His blond curls are slicked down and parted above a still, grave face. His left hand is clinched and at his side.  His father, also Charles, kneels beside him, loose limbed and handsome, looking down at a guitar he balances upright on the ground, pointing to it, caught mid-word. Taylor kneels at my father’s other side, Above his forehead, high like my own, his darker curls lift up, almost a pompadour—my cousin calls it “Hansel hair”, and says that all the boys had it—and he is smiling, not down at my father but for the camera, a posed, poised grin.

All told, I have three photographs of my young father. In each his eyes have that same downward slant, his brow the same anxious crease. In the first he is a few weeks old, held in his mother’s arms. If an infant can look worried, he does. His eyes are closed but his right hand is in motion, tugging the bodice of his mother’s sleeveless dress, making its neckline slightly akilter. Her left arm cradles him loosely; her right hand clinches the arm of their wooden chair as if in an effort to remain upright. She is thin, so thin, even for the Depression. Even for Laurel County, Kentucky, 1931.  In a few months she will be dead from “the consumption”—tuberculosis, most likely—and her son will be given to her in-laws, his grandparents, to be raised.

This photo is also tinted. Its particulars are written not on its front but its back: her name, Pauline; my father’s name and date of birth; these words—“taken between then and August 1931; hand painted May 1956.” All this in my mother’s hand; then my young scrawl stakes a claim: “Pauletta’s”.

The other is my father grown lanky and taller than at three, though still in short pants and with slicked back hair, holding a younger girl’s hand. They are standing in front of a hydrangea bush in a fenced-in yard, most likely their grandmother’s. She is smiling; he not quite.

Even while my father lived I would study these two photographs for some clue of who he was, and who we were together, my family, the ones I knew—mother, father, sister, brother
and me.

And now a third photograph. New clues for deciphering. This grandfather who haunted my father both before and after his death. Who haunts me.

I remember a conversation with a man I had thought I loved—after the crash and burn of us, my eyes still raw from the smoke, my breath still ragged in my chest. We were speaking of his dead father, whose beatings decades ago left scars I could and could not see. “I have forgiven him,” he told me, this man who could not love me.

I never thought he would be so handsome. He looks almost kind. You can almost imagine him, after the picture is taken, putting aside his guitar, reaching his arm around to scoop my father up on his knee. But that seems unlikely. This man, my grandfather, was not cruel in the way of my onetime friend’s father.  He was simply not a father. He was a drunk, a n’er-do-well, who skulked in and out of his parents’ home, ignoring his only son, his namesake, the solemn Charlie-boy, except to now and then take money from his piggybank.

My father’s father never touched him. Not in anger, not in love. My father did not forgive his father,
nor the rest of the family—

What is worse, an absent father, or a father who does not claim you when he’s there? Neither as bad as a father who beats your brother into the hospital. This was the father the man whose scars scarred me claims to have forgiven.  My father’s father never touched him. Not in anger, not in love. My father did not forgive his father, nor the rest of the family—the aunts and uncles he was raised with almost (not quite) as a younger brother; their children, the cousins who had what he did not.

We did not, my sister, brother and I, grow up completely bereft of extended family on either our father’s or our mother’s side. But there are huge gaps in my knowledge of my father’s kin. Great aunts and uncles who are only names beneath smudged memories. Second cousins who found us through the grace of internet obituaries after my father’s death.

To be fair, my father did try to reconcile with Charles Sr. before he died, perhaps at my mother’s urging, wanting their children to know their grandfather, or he knew the wound of absent love would only fester and spread after death. I don’t remember this visit to my grandfather. I was too young and adored to pay much attention to a man who paid me none. By the time of his funeral, I was a little older, and he was the first dead man I had ever seen.

After his father died, my father succumbed to a depression that was surely presaged in those young sad eyes.

There is a photograph from those days. My father is sitting in an armchair, staring forward, his dark blond hair just beginning to recede from his high forehead.  His eyes are focused on nothing anyone can see. I am standing behind him, eight or nine years old, my arm around his neck as if I am trying to hold him up, or hold him there, though he seems too stunned and weary to be thinking of moving. My head is slightly tilted, as if in question, looking down at him with what I can only name as tenderness.

What is worse, a father who never showed you love, or a father’s whose engagement, adoration, entire affect is suddenly removed, though he remains? The former, I say. I know. And yet…

My father said later—much later, having finally lived into an era when there were first therapies and later drugs available and effective—that he lived in fear he had become the one thing he swore he’d never be: a father who was not a father. He lived, he said, knowing that the alternative would be, for us, unbearable.

A few years before my father died—before, or perhaps while, the lesions began to form deep in his brain, ultimately taking his ability to read, though not his love of books, affecting certain aspects of his memory, bringing odd waking dreams he could not distinguish from reality—h spoke to me of his inability to forgive his father. We were in the car, him driving, my mother beside him, me in the back.  “Marea really nailed me, last visit,” he told me. Marea, my sister’s adult daughter, his only and much loved grandchild.

He said, “She told me she had forgiven her father. That she didn’t need, anymore, for him to be other than he was.”

Her father, my sister’s first husband was, as they said of Charlie, Sr., “a drinking man.” Though more consistently present in my niece’s life than my father’s father in his, there were uncomfortable parallels that you can see my parents drawing even in my sister’s wedding photographs: my mother’s thin-lipped smile, my father’s wrinkled brow.

Now my father said, “I never saw the point in forgiving him. He didn’t want forgiveness. He wanted nothing to do with me, not as an adult, not as a child. Marea said it’s not about what he wants; it’s about what we need. She felt so much lighter, after. But I can’t.”

And yet, we, his children, were raised in the shadow his father cast. We all drank early and, for awhile, to excess.

Consciously or unconsciously, my father’s life was defined, at least in part, by what his father was not. He did not drink. His presence with family was steady, loving. He was briefly a minister, always a teacher and scholar.

And yet, we, his children, were raised in the shadow his father cast. We all drank early and, for awhile, to excess. There was my sister’s first marriage and divorce. And there was that man, the last in the series of men I tried too hard to make love me.

That time, the months leading to and away from the disintegration of a relationship lived mostly in my head and heart, that time of longing and inevitable loss spiraled me into my own depression. I was in my early forties, roughly the age my father had been when his father died. It did not help, much, to know that my anguish, the bouts of uncontrollable tears punctuating days and weeks of a dull, almost physical ache, was not only about that man—brilliant, alcoholic, charming and cold in breathtaking succession. I knew that, but could not say, exactly, why then I hurt so badly, only that it was deep suffering. Primal. At my core.

And not, I see now, at my core alone.

After my father’s death, another photograph came into my hands from yet another of his cousins, of my father’s uncles and aunts, eleven in all, the oldest in their twenties, the youngest maybe two. Uncle Taylor—ten or twelve—is the only one who’s smiling. Hesitant, as if it might not be allowed.

I met the man who became my husband while still reeling from the loss of the one before. Why, after all those years of pulling away from men who might love me, pushing forward only in the most hopeless of relationships, I allowed him in is not quite the mystery it might seem. There was therapy that helped that final wounding be, at last, the “crack that let the light in.” There were his own hurts, acknowledged, healing. There was—is—his open-hearted love.

My motherless father loved the woman who was to be my mother openly and without hesitation from the moment he saw her.  Although at first taken aback by the fervor and immediacy of his affection, my mother soon allowed herself to be loved, and to love.

There are years and years—two decades—between those photographs of young
Charlie-boy and the next ones of Charles, my mother’s new husband, then father to my sister, then me, and my brother, John Charles, the last in the line. In between, his sad gaze has been replaced by an engaging, almost goofy smile.

Pauletta Hansel is author of four poetry collections, including The Lives We Live in Houses and What I Did There. Her fifth, Tangle, is forthcoming from Wind Publications. Her work has or will appear in Atlanta Review, Postcards Poems and Prose, Still: The Journal, Listen Here: Women Writing in Appalachia, Appalachian Heritage, Appalachian Journal and American Life in Poetry, among others. She is co-editor of Pine Mountain Sand & Gravel, the literary publication of Southern Appalachian Writers Cooperative.