He’s a limb starer, they say. John, there. He sits all day long and stares up at the limbs when the leaves have fallen and the winter white, grey, bright sky fills in the gaps, becoming the almost-iridescent shadow of the memory of leaves. The crooked, ice gnarled limbs. John writes stories, epics, unfinished anecdotes, jokes without punch lines, odes to his love for these, his limbs. John, why do you stare at them? they ask. John, doesn’t the sky beyond hurt your eyes? John, what will you do when there’s no one left? John, they say, John, can you hear the frequency at which the human voice turns to fear? Anger? Can you hear the wind as it snaps a limb in two? Can you feel the changes, John? Can you see beyond the limbs? His glasses are taped in the middle there from where a branch snapped in a blizzard and came down upon his face. The broken frame sliced his nose and blood, so much more blood than anyone would expect, puddled in the depressions of his eyes. What did you see, then, John? Were you cold? Did the snow insulate you like fur? Do you know we’re planning to leave you? Can you feed yourself real food like you feed your whims to stare and dream? They worry about John, they say. They worry enough not to tell him they’re leaving. They worry enough that when a branch fell in a blizzard they finally noticed and brought him one blanket and one wash cloth. The blanket was to keep him warm and the washcloth to soak up the pools of blood so he could cry tears into the snow. They cared enough to tape his glasses and set them unflinchingly back to his face. Can you feel cold, John? Can you cry for us? they ask. Show us, John, that you are us and we will uproot the tree and take it with us on our journey. John stares at tree limbs and paints pictures with paint only he can see. His fingers are skinny like ones meant for piano. John, do you create entire festivals of sound and light to celebrate the last fallen leaf? Do you want someone to hold you and murmur voicelessly into your chest? They want, more than anything they say, to see John’s face turn with emotion. John is thirty-three or twenty or forty-four. He is not a child, but they cannot agree on his age. They cannot agree on how long he’s been there, right there, staring up into the limbs. How long does dew take to dry, John? How long does frost take to turn wet like dew, to whisk from denim-covered legs like fog leaving a river? We don’t want to leave you, John. We have plans involving wagons and twelve strong men set to strike shovel and trowel and pickaxe to frozen dirt. We have yards upon yards of burlap to wrap your world’s roots for internment in their new home. We have a plan, John. It involves you, John. All you have to do is blink tears. All you have to do is whistle slow a song of mourning, catch yourself in a riddle you cannot answer, smile. Ride the tree to your new home with new words promising to be different, to extrovert the town over. All we need is for you to change, John. We need your word. Speak. Reflect back to us the best parts of ourselves. We need you, John. We need to obliterate you and bury ourselves in the notion of loss where your tree once held the earth together. 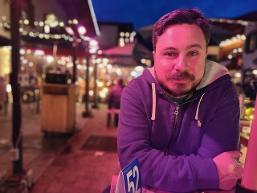 Shane Stricker holds an MFA from West Virginia University and is a PhD candidate at the University of Tennessee. He has been awarded a fellowship to attend the Writing by Writers Workshop at Tomales Bay and the Mike and Frieda Mullins scholarship from the Appalachian Writers’ Workshop. His work appears in Passages North, The Anthology of Appalachian Writers, Lake Effect, Bull: Men's Fiction, and other magazines and journals.