How did Danny start the fire?
He used gasoline from the 76 station across the street, the one by the Motel 6 where we used to pay cash for rooms the year before the towers fell and Joe went off to Iraq. When I asked him later, Danny said he started with the bedroom carpet but became less deliberate as he went along.

What did you say when he told you that?
I said, “And you filmed it? With my camera?”

Did you think that was weird?
Of course I thought it was weird. But then I watched the tapes. Not just his and not just the fire. I watched mine, too, the ones from before Joe left.

What were you filming?
I wasn’t sure at the time. Everyone. Everything. All I knew was that the towers were there and then they weren’t and thousands of people were dead and nothing was ever going to be the same. I knew Joe was going away. I didn’t know if he was coming back.

What did Danny burn?
The past.

Whose past?
Joe’s. Mine. Anybody’s.

What else did he burn?
He wouldn’t say.

What is the temperature of fire?
Depends on the ignition source, the accelerant. The house burned at a cool 1,900F.

At what temperature does steel melt?
2,500F. Sometimes hotter.

And the towers?
They more than burned.

How do you know all of this?
I read a lot of stuff. On the internet.

You can find anything on the internet.
Yeah, you can. That’s why everyone’s so scared all of the time now.

Where was Joe during all of this?
In the bathtub.

Why was he taking a bath?
He wasn’t.

Did Danny know he was in the house?
Danny did what he was told to do.

Who told him to light the fire?
Joe did.

I’m confused. If Joe was in the bathtub—
He was. And then he wasn’t. Here, watch the tape.

Is he wearing—?
Fatigues, yeah. Just watch. At the seven-minute mark, you’ll see it. You’ll see the flashover and then—

What do you mean?
He didn’t burn. They didn’t find him anywhere. There was nothing. No bones, no bullet.

Bullet?
Joe took a bullet through the back in Fallujah. It was so close to his spine that they left it in.

At what temperature does a bullet melt?
300ish.

Then it could have been there.
Right. But it wouldn’t evaporate. It would deform. They would have found the puddle of it when they cleared the tub. And Joe, of course.

What the—
It’s crazy shit, huh? Do you want to watch it again? In slow-motion?

What happened to Danny?
Nothing at first. No one had wanted the house there for as long as anyone could remember, but Danny held on to it through the years. It was his and Joe’s. Things had been built up around it—the motel, the gas station, another motel, the Circle K. There were no neighbors, no other damaged structures. Because no one filed an insurance claim, the initial arson investigations were abandoned. After it burned, Danny sold the land quickly, to a developer who eventually turned it into a self-storage facility.

What did Danny do with the money from the land?
He went off to film school like I did. Got sober like a lot of us did. Got medicated and talked back to sanity, or something close. He bought a small cement marker in an underwater cemetery on the north side of Catalina Island and put Joe’s name on it, in spite of Joe’s wishes to be forgotten.

But I thought you said they never found the body.
They didn’t.

You don’t mark graves for people who are still alive. Unless you are trying to hide something.
Joe died long before Danny set the fire.

What happened to Danny in the end?
There is no end. He’s still kicking. He’s making recruiting videos now for the marines over at Camp Pendleton. He’s saving up to buy another house. He’s paying off his student loans. He’s contemplating buying life insurance even though he has no beneficiaries…but they don’t care about that. They only care about the fire. That’s all they want to see, you know. They forget that a fire leaves ashes behind. They don’t really understand.

Who are “they”?
The network. The studio. The producers who think they know what this story is about but don’t have a fucking clue. They never do.

Why didn’t they ask Danny to make this film?
To be honest? I’m the one with the tapes. I’m the one who kept the proof all this time.

Since “they” don’t know what this story’s about, why don’t you show me.
That’s where I’m struggling. Tape has limitations. It only captures what can be seen: two young guys in white T-shirts and black baseball caps standing side-by-side. Two friends casually disinterested in the room, the people, the world. On tape, the moment is a blip. A tattooed hand on the nape of a bare neck. A softening jaw. But there’s more than the tape shows. If you’d have been there, you’d know what I mean. You’d have felt their bodies refusing to be bodies anymore. You’d have understood. They were going to have to become one shape if they were going to be able to hold it all in. Time, touch, urgency, and the thing under the thing that we could all see back then but chose not to. The thing we were too afraid to see because the world told us we could only be afraid.

Which was what?
Love. 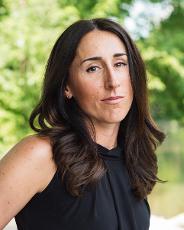 Tara Stillions Whitehead is a writer and filmmaker living and teaching in Central Pennsylvania. Her work has appeared in or is forthcoming from a variety of journals and magazines, including The Rupture, Cream City Review, Fairy Tale Review, and Pithead Chapel. Galileo Press will publish her hybrid chapbook, blood histories, in 2021, and Unsolicited Press will publish her full-length story collection in fall of 2022.