Editors' note:  We worked out the logistics of Still: The Journal in the summer of 2009, while we were sitting around Jason Howard’s yellow Formica kitchen table. Jason would be our co-founder and creative nonfiction editor. He would help guide us through the first 13 issues of Still. In November, 2013, Jason accepted the position of editor at Appalachian Heritage, the premiere quarterly in the Southern Appalachian region, based at the Loyal Jones Appalachian Center at Berea College. We are happy for our friend, and we know he is well equipped to lead that magazine forward.

Jason is an award-winning writer and editor and the author of four books. His work has been featured in national and regional magazines and newspapers. In January, 2014, Jason earned his MFA in Creative Writing from Vermont College of Fine Arts. We want to congratulate him on that, too.

And while we are saddened to see Jason leave our pages as creative nonfiction editor, we are grateful for his vision and his dedicated work that helped to bring Still: The Journal from an idea at a vintage kitchen table out into the reality of the world. We anticipate more and more good things for Jason Howard.

In the meanwhile, we are fortunate to give you this unpublished feature story from Jason. In late 2010, Jason interviewed Sam Hall, a coal miner employed by Spartan Mining, a subsidiary of what was then known as Massey Energy. Hall had just filed suit for workplace harassment and discrimination due to his sexual orientation. Today, Hall continues to fight for fairness legislation in West Virginia. 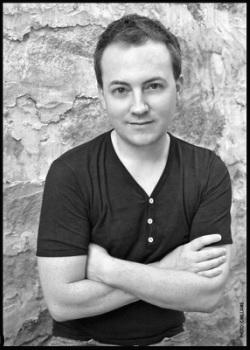 Gay and Underground in West Virginia

Sam Hall’s hands divulge his profession. He is only 28, but already they are old before their time, lined with hard work and a faint layer of coal dust that no amount of scrubbing can remove. He enters his lawyers’ office in downtown Charleston, W.Va., holding hands with his husband, and smelling of soap and citrusy cologne. Just off work from the mines, Hall has driven into the city after stopping for a quick shower at his home in Elkview.

It is his fifth year in the mines, plenty of time to have established comfortable relationships with his fellow workers. Instead Hall is suing his employer, Spartan Mining Co., a subsidiary of corporate outlaw and Central Appalachia’s largest coal producer Massey Energy, for allegedly permitting and provoking harassment and discrimination against him due to his sexual orientation. He is seeking an unspecified amount for lost wages and emotional distress.

The complaint, filed last month in Kanawha County Circuit Court, is yet another thorn in Massey’s increasingly raw flesh, following years of well-documented corrupt political influence, environmental devastation, and safety violations that culminated in the Upper Big Branch Mine explosion that killed 29 workers in April 2010. Massey representatives could not be reached for comment on the lawsuit.

Hall maintains that he has endured years of verbal abuse, lewd gestures, and malicious acts from both his supervisors and fellow miners. “I hit my breaking point,” he says softly. “I’d took enough. It was time for one way or other to back them off of me.”

It hasn’t worked. Despite the lawsuit, the harassment has continued. Just last week Hall’s car was vandalized at work with the words Quit Fag scratched into its side. Perhaps more seriously, the wheel weights were removed.

But Hall is made of tough Appalachian stock, one of those West Virginians who are known to quote their state motto with pride: Mountaineers are always free. He has no intention of giving up, of cowering in a corner, of being pushed out. In many ways he is used to this struggle, for freedom is a right that Sam Hall and other Appalachian gays have been fighting for their entire lives.

Hall grew up on a farm in nearby Clay County, a seemingly typical mountain boy who enjoyed playing in the woods and fishing in the creeks. The youngest of three children, he recalls a stable, if financially insecure, childhood. “My parents made do with what we had,” he says. “It wasn’t real easy.”

But life became more difficult for Hall in elementary school as he began recognizing his attraction to other boys. When he reached middle school, he began to be teased and bullied. “I just kept quiet,” he reflects. “I’m the type that if I can avoid getting into a scuffle with somebody I’ll do it.”

Hall also internalized his father’s fire-and-brimstone sermons delivered in their nondenominational church, which considered homosexuality a grave sin. By the time he turned sixteen, he had heard enough. Not only did he quit church, but he also moved out of his parents’ home, taking two-part time jobs at Kmart and Kroger to pay for his rent, living expenses, and home-school program.

“I wanted to be independent,” he says. “I was my own person. I didn’t have mom and dad telling me what I can do, that I was wrong, that I was going to hell.”

He subsequently came out to his mother, who later broke the news to his father. Both retreated to their fundamentalist religion, writing off their son’s announcement as a phase. An estrangement followed that lasted eight years.

Hall knew he had to leave West Virginia, and the Marine Corps offered a way out. He enlisted just before his eighteenth birthday, and was stationed in Maryland. But he soon began chafing under the strict orders and “Don’t Ask, Don’t Tell.” After serving three years, he received a medical discharge and returned to West Virginia.

Things seemed better in the mountains. He became a regular at one of Charleston’s gay bars and was surprised by the city’s openness. “You can see two guys holding hands in Charleston and it ain’t no big deal,” he says. “There’s a lot more open-minded people in this area than up in the country.”

He began looking for a job, and was intrigued when a friend told him that Massey was hiring underground miners. “He was talking about all the money he was making, so I thought I’d give it a try.”

He took a job at Massey’s Winifrede Mine in November 2005 as a “red hat,” one of several underground trainees named for their trademark red helmets. Hall also made the decision to remain in the closet at work.

“I never come out,” he says. “I didn’t want [those] kinds of issues with anybody. I kept it secret for a long time.”

But his fellow miners became suspicious after he began defending gays against their homophobic remarks. According to his lawsuit, the harassment began when Hall went horseback riding with a co-worker, and the mine’s superintendent, Scott Lansenese, commented that the two had experienced a Brokeback Mountain moment, a reference to the Oscar-winning film about two gay cowboys.

The insults reportedly continued with Hall’s boss, Martin Johnson, joining in. When the mine closed in June 2007, Hall went to work at the No. 130 Mine. The abuse followed him when the mine’s chief electrician, Mark Delung—identified in the suit as a good friend of Johnson—began calling Hall homophobic names and writing slurs on his lunch bucket. Hall’s boss gave Delung a warning, but it continued as other workers became involved, writing Faggot on his car and attaching a sign reading I like little boys.

Hall relocated to the No. 2 Gas Mine, and despite more warnings, the harassment escalated when co-workers began shaking their penises at him underground and in the bathhouse. He was transferred once again, and Hall became increasingly concerned for his safety when he heard one miner say, “I would like to see all faggots die.”

Three months later he returned to the No. 2 Gas Mine, where the suit alleges that mine foreman Randy Thomas began waving his penis at Hall throughout the workday. Hall then met with President Larry Ward and other company officials detailing the abuse, and they responded by suspending Thomas for three days and transferring Hall to the Slab Camp Mine, where he continues to work and face abuse and threats.

“It hasn’t been easy,” he sighs, his voice trailing off. “Knowing that you have eighty men to work with and you’re centered out. You feel like you’re two inches tall when you’re walking into a room. But I think I’m doing pretty good about keeping my head held high.”

It is safe to say that Hall felt a bit taller one Monday morning after a weekend visit to one of Charleston’s gay bars. To his surprise, he found one of his abusers, a married man, dancing onstage with another guy. “This man literally gave me hell,” he shakes his head. “I’ve just left that. If he’s got things that he wants to do behind his doors, that’s his business. That’s what I wish they’d done to me—left me with my business.”

A bright spot during this time was when Hall met his future husband, Burley Williams, 37, during a night out in August 2009. They had dinner at Hall’s house the next evening, and have never been apart since. Last July they traveled to Washington, D.C., to be married. Their love is palpable, with Williams reaching over to take Hall’s hand as he speaks of the stress they are both under.

“I worry when the phone rings. You never know, especially with what happens in the mines. I worry about him coming home, if someone’s out to hurt him because of this.”

An obvious question is why Hall and Williams choose to remain in West Virginia, when they could easily become expatriates and settle in a neighborhood like Dupont Circle or Chelsea. But when this is raised, Hall offers an indignant response. “This is where we’re from, and I’m not going to be pushed away. I’m not going to be told, ‘Well, if you go here it’s going to be easier for you.’ Life’s not easy. We’re going to live our lives whether the neighbors want to see it or not.”

Too often, though, notes best-selling novelist and Mountain State native Denise Giardina, the neighbors don’t want to acknowledge it. “For LGBTs in rural Appalachia, it’s ‘Don’t Ask, Don’t Tell.’ People who are not open about their sexuality are accepted. But those who come out and try to live openly will be shunned, not by all but by many.”

A former gubernatorial candidate and leading critic of Massey Energy, Giardina sees a link between the company’s overall culture and Hall’s harassment. “The land and individuals are expendable to them. It should come as no surprise that this culture of intimidation carries over into other areas. The only thing that matters is coal production.”

But she also believes that attitudes toward gays are changing in Appalachia, and Hall agrees, having witnessed it in his own family. “My parents have been really good about this whole thing. They’ve really surprised me. They’ve informed me and Burley that they back us 100 percent.” He smiles at Williams. “My dad loves him. And the way I look at it is if my dad can [change], anybody can.”

Hall has also been surprised at the support he has received from unlikely places, including many co-workers. He is patient, determined to wait this out. His attorneys say that, precluding a settlement, a trial should happen within a year. “We would rather make peace,” says lead attorney Roger Forman. “We want to teach people, because we think people can find their better angels.”

“You can only improve your life by knowledge,” Hall concurs, twisting his silver wedding band. “[It’s] one thing to say you’re an equal opportunity employer, and it’s a whole different ballgame when some employers aren’t. Words are one thing—act upon it.”