The Family Ashe by Mary B. Moore
Blue Ridge Mountains
For the Poet Jane Blue
A few miles from the New River where
the shallows ripple my old face,
the young face, long borne away,
the rural mall is named
after the county named after the family Ashe,
which still owns the Ingles supermarket
and the Goodyear tire store.
Their surname is Jane’s now
who’s urned a continent away
where the Sacramento River meets the American,
near the spot the Mexicans named after their first
communion with the tribes
they enslaved to build the missions,
whose beautiful arches and columns
mimic Spain’s in the unending chain––
conquest, loss, conquest––
which Jane knew and might have written,
but which I didn’t expect to remember here
in the Blue Ridge where my cabin
sits below the wide mountain the windows
can’t frame, the wind can’t
perturb, whose conical shape and peak
the omnipresent woods color
and soften—the woods,
a one composed of many––
like Joe Pye Weed’s blossoms,
its many flowerets forming the spur,
or like the band of poets Jane
and I once read Howl with
in a downtown mall,
or the Cherokee who might have held
the mountain sacred––
I would––a local Olympus, solitary and high.
Holy, holy, into the holy mountain
they went. I would like to tell Jane
the mountain’s real name but no one
here speaks its language.
2
The wind is wild again today,
the grass-snake green tree-boles
no bigger than does’ legs
flex into the undulance,
wild-walk the billowing.
I can’t see the leaves to name
their trees, but closer, lackberry––
no, blackberry––entangles some green froth,
a fern? Its name perhaps, its spore maybe.
Lack is everywhere, and bury,
among these ridges whose name you carry,
who carry yours. The wind turns the sumac fronds’
undersides out, the leaves arrayed like ribs
or the white-washed wooden slats
that sign the intersections here––
Doc Robinson, Dan Jacks,
Mary Johnson––memorials––the roads
leaf-littered. Remember Graves’ alphabet of trees,
or is it leaves? Runes the leaves’
ruin leaves? The curled poplar leaves,
grounded and rocking, the oak’s
little boats. I listened to a reading
you gave last night, your melodic alto:
crow, rose, bear “the wilderness abandoned.”
A great wind howled between
the houses the night you died
in Sacramento, a continent
away. My sacrament?
To name the leaves bury,
boat and rocker, the doe and snake trees,
the fern Perhaps. The mountain, only the ash
and bone people can name.
The wind is their wake, and yours. 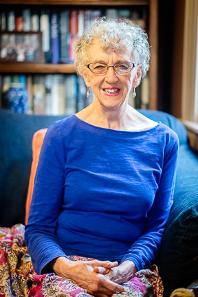 Mary B. Moore’s books include Dear If, (Orison Books, 2022), Flicker (Dogfish Head Prize, 2016), The Book Of Snow (Cleveland State UP, 1997), and the prize-winning chapbooks, Amanda and the Man Soul (EMRYS Foundation, 2017) and Eating the Light (Sable Books, 2016). Poems have appeared lately in Poetry, Prairie Schooner, Birmingham Poetry Review, Terrain, and others. She lives in Huntington West Virginia with a philosopher and a cat and has one beloved daughter who lives in Northern California. Moore has lived and written her way into Appalachia for 26 years. She came to West Virginia to teach at Marshall University.