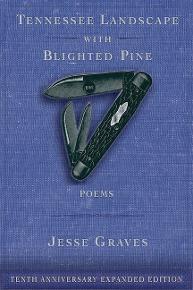 A high school poetry teacher recently described to me how difficult it had become to obtain enough copies of Tennessee Landscape With Blighted Pine (2011) to create a classroom library set for his students. Such scarcity suggested to both of us that those who own a copy rarely let it go. Jesse Graves is the Poet in Residence at East Tennessee State University and has published four full length collections including two Weatherford Award-winning volumes, and a collection of essays entitled Said Songs. His newly reprinted first book, Tennessee Landscape with Blighted Pine, 10th Anniversary Expanded Edition, functions as an opening bell and firmly established his voice among the most prominent place poets in contemporary American literature. This expanded 10th Anniversary printing does well to recognize the role his work has played in giving voice to rural Tennessee valley people while simultaneously shaping the next generation of poetic discourse. The book describes Graves’ “own private Ithaca” as he states in the newly included poem “An Exile,” and many of these poems reveal Sharps Chapel, Tennessee as the centermost place of his familial history and personal imagination, the magnetic pole upon which the author’s globe rotates.

Readers familiar with Jesse Graves’ work will find many of his more anthologized poems included, such as “Eulogy for a Hay Rake,” “Digging the Pond,” and the longer title poem “Tennessee Landscape with Blighted Pine.” In “The Road into the Lake,” Graves reminds his readers of the long and enduring cost of the TVA lakes, the damming of entire valleys and the removal of their communities including his own family’s farm. He describes fishing for bluegill in the reservoir that covered their old homeplace, writing:

My line never went far enough, but it was
the casting that mattered, the being small there
with my father and my uncles, standing as near
as we could to land we would never inherit.

Similar to the author’s Homeric Appalachian travel epic Specter Mountain (cowritten with William Wright), poems like “Facing West from Cumberland Gap” remind the reader of the region’s wilderness history prior to European settlement. He writes “[t]he land existed outside all / money and accounts, no ledger / except time’s steady deduction. // The Motherland of the forest / calls some of us still.” Here and throughout the book, Graves argues for greater awareness of the cost of poor land ethics on his hometown and any number of places across the South. Such pieces come sprinkled between examinations of family photographs like “Field Portrait,” the retelling of a wily uncle’s tall tales in the new poem “Some of His Stories Were True,” and descriptions of refinishing a ‘69 Camaro in “Detroit Muscle” before taking the car on a roaring afternoon tear. Placed beside one another, these poems offer a reader the sense of living among old memories while still remaining firmly planted in contemporary Appalachia.

“Does it not bother you,” she asked, “how our view

on the quiet meadow, where the deer make

their beddings, and where foxes come down from

high dens to drink, will be blocked by a fence?”

The newly added fourth part carries a similar range and content with the rest of the book, and its inclusion adds to the scope and depth of the collection. The final poem in the new section, “Rural Route Gallery,” presents a series of character poems with each voice facing various economic hardships. “Lonnie” attempts to justify a boy’s refusal to speak in the face punishment, “Edith” argues why she worked as a “scab” in her factory job, and “Mayes” defends her concern for her neighbor’s eternal salvation. The final section, “Kate and Jim” takes on the growing but often overlooked issue of rural gentrification. The first five stanzas act as a conversation between a husband and wife as they watch a large house raised in the bottomland below their small shanty, including common concerns for the surrounding environment:

“Does it not bother you,” she asked, “how our view
on the quiet meadow, where the deer make
their beddings, and where foxes come down from
high dens to drink, will be blocked by a fence?” (9-12).

By the end of the piece, however, their voices have disappeared, replaced with an old woman remembering the couple’s small dwelling. She tells a grandchild “It was no bigger than a shed, and Kate and Jim / (now what was their last name?), lived there until / my daddy bought them out for next to nothing.” For many who have lived near a resort, National Park, or ski town the story rings of familiarity. But while such stories of displacement often point the finger at out-of-towners, Graves is careful to end the poem with the realization that locals too live on land with histories longer than their own memory.
But the book does not entirely feature Union County or Tennessee and includes a selection of poems set in New Orleans. In “The Night Café,” the speaker explores alternate realities and personal histories left unlived, and muses with a bar friend on personal dreams which “added up to lives someone chose against; / entire books we conceived in dreams but did not write.” Such distance provides the speaker with a certain reprieve from the homeplace and an opportunity for perspective, and the book itself benefits from such alterations of outlook.
A powerful authentic voice, Jesse Graves offers ear-catching stories like David Bottoms with lines as succinct as Robert Morgan while moving his characters through a land as full and vibrant as any found in Flannery O’Conner or Ron Rash. Though a tall voice in Appalachian writing, the Sharps Chapel native centers his work not on the mountain south, nor East Tennessee, or even Union County, but rather the particularities of his small town and his own family farm. Tennessee Landscape with Blighted Pine has found its way into many a college syllabus and workman’s glovebox, proving to be a rare work which stands up to academic inspection while, most importantly, continuing to connect with the very people it memorializes, describes, and honors.

Micah Daniel McCrotty lives near Piedmont, Tennessee with his wife Katherine. His poetry has previously appeared in The Midwest Quarterly, Louisiana Literature, Storm Cellar, Sycamore Review, The Hopper, and The James Dickey Review among others.