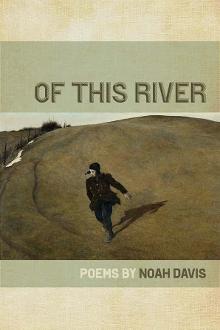 "And tadpoles, / like oil, / laid between / drowned leaves” (1). As much as any piece of writing I’ve encountered, Noah Davis’s poetry collection Of This River, transports me to a very specific place—here, in these poems, the mountains and valleys of Central Pennsylvania—via his beautifully rugged descriptions, reflecting the land and the spirits that inhabit them (human or otherwise). Admittedly, this is partly because I was raised on the other side of the mountain, opposite Davis’s Allegheny Front, where the steep peaks on maps stagger into the Allegheny Plateau.

For instance, when reading the poem “Drowning as Taught by Short-Haired Girl,” as our speaker says “while the water entered me I did / recognize the sleeve of reservoir” (3), these lines pull me deep into my own memories of driving the winding roads of a precise mountain, seeing the woods peel back to reveal the sublime sight of the reservoir above Tipton, Pennsylvania—where Davis grew up. But when I recall how that road hugs tight against a highwall overlooking the dark water, I can never keep track of what vehicle I’m in, or who’s driving—my mother, my father, grandparents, great-aunts and uncles, or myself—as my memories flit by like tree trunks. This same feeling grabs me when I read Of This River, as Davis’s poems ask us to savor both past and present. Though, unlike my distorted memories, Davis is always urging me to the next line, the next page—maintaining a sense of momentum.

From the beginning, Davis’s placement of poems within the context of the collection is as important as each layer of meaning within individual lines. For example, “Drowning as Taught by Short-Haired Girl,” the second poem of the collection, allows itself to be read as a thesis and synopsis for the book as a whole. As Short-Haired Girl, “thought of the snapping turtles at the base / of the dam… / [waiting for her] to become meat, / a lesson they learned / from eating all those / who drowned before” (3), these poems become a body that represents the literal flesh, the accumulated life of our protagonist, serving to remind us of our vulnerabilities, complexities, and interconnectedness.

The images and themes of human beings encountering choices, over generations, with the larger natural world are juxtaposed with scenes of rural life and underlie many of the poems that make up Of This River. But rather than limiting this story to one voice, Davis calls on a multitude of characters, which include Short-Haired Girl’s parents, her brother, her grandmother, brown trout, coyote, and a raven king, among others, to create a fuller picture of Short-Haired Girl, and her environment.

. . . Davis crafts the poem’s line breaks and white spaces to read like ripples cascading down a mountain stream, embodying the smooth, playful motions of a trout . . .

In “Brown Trout Tells Short-Haired Girl about the End of October” Davis crafts the poem’s line breaks and white spaces to read like ripples cascading down a mountain stream, embodying the smooth, playful motions of a trout: “Through the run, walnuts bob, / tinting the water sweeter. / These days, the last of the sun / will reach the stony bottom” (20). For any fisherman, even the language mimics an elusive trout glowing in clear water. And Davis works to keep reasoning and truth on the surface—not muddied by riddles. I find myself wanting to be more like Brown Trout, as they tell of a time when they encountered an obstacle: “A spike who broke / his leg crossing. / I glide between antlers, / cheek hairs sway in the water. I fin inside his chest… / I slide out, wander downstream / with the rest of the year” (20). In this way, Davis uses personification only to give Brown Trout human-language, not to humanize the fish.
In another poem “Oil as Taught by Short-Haired Girl,” our speaker explains:

We fed the turtles watermelon until shit covered

the water’s surface. My brother and I skimmed off the flakes like oil.

When Gram was ready, we turned the barrels over in the yard, and she

shot the turtles in the head with the .22 Pap gave her. He believed you

And later in the poem: “Gram’s thumbnail was orange from tar and my brother asked why it / wasn’t black. That’s why turtle meat was pink, because watermelon meat / was pink. Gram laughed and said if we peeled her far enough she’d / be dark as oil” (42). Within this somewhat eccentric story, Davis ruminates on several ways humans inflict harm on others, themselves, and the planet, while somehow maintaining a childlike sense of love and questioning.
Other frustrations with caretakers can be found on various micro and macro levels, such as in “Short-Haired Girl Goes to Church” when “in Sunday school” she asks “what we’re supposed to do / when the mountains / are all dust and rubble? The teacher says / God will provide / for the faithful” (17). These lines show how elders can pass on burdens disguised as religion—or something else. How caring, inquisitive kids can get their heads split open, and their bodies fill up with the black water of guilt. Though guilt is interpreted by our bodies as various feelings or anxieties, gathering like flakes of shit and tar, or like Brown Trout—it can move through us. What I find so powerful about Davis’s writing is how deeply he empathizes with his subjects, which are at the core, all creatures of earth facing a myriad of environmental fears, including things like climate change, deforestation, mining, life, death, and religious trauma.
Davis is a writer who undoubtedly is always absorbing his surroundings, be it miles into the forested crease of the mountain or dribbling into a small town rec center. In “Thursday Nights,” we’re “at the gym / [where] hands made for / factory work and / driving trucks / shoot jump shots” (18). The lines of the poem bounce around the page like x’s and o’s of a game plan, following various players, until reaching a moment where: “Some still believe they can fly / and take a handful of uppers before / the game: last week one guy dunked / and his finger’s still / caught in the net” (18). Throughout, whether for himself, or his readers, Davis strives to be a poet's poet, seen in the latter quote, where he makes great use of the line break to mimic the action of the words.
But Of This River is more than a collection of good poetry; these poems tell a full-story arc. And even as a local, Davis’s writing has the ability—like the best folklore—to make the reader struggle to separate fact from fiction. Like how I know of a spot along Bell Tip Road where there’s a dark stain, and “glass the width of rain” (29), and I can’t help but wonder if it’s the exact location of the accident in the poem “Murmuration on Bell Tip Road” or if it’s just that Davis captures the rhythms of these ridges and valleys in Central Pennsylvania so vividly. I can’t speak to how these poems reverberate anywhere or anytime else, but here, now, does that matter? It’s quite a gift to give a singular place, or even one person, a reminder of how much poetry is right here in front of our eyes. Twenty years ago, Noah Davis’s father, poet Todd Davis, concluded his own debut book of poems by asking, “At this hour, / what isn’t prayer?” (Ripe, 86)—Noah Davis’s Of This River offers his generation's only worthwhile answer: “Amen” (63). 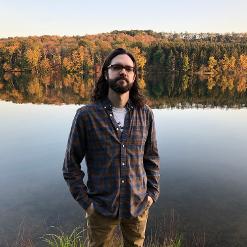 Jordan Tyler Temchack is a poet, songwriter, and folk artist. He lives with his wife and dogs in Central Pennsylvania, where they wander the Allegheny Mountains. His work can be found at Northern Appalachia Review, Prime Number Magazine, and Passengers Journal.