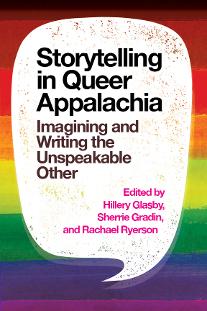 West Virginia University Press published LGBTQ Fiction and Poetry from Appalachia, edited by Jeff Mann and Julia Watts, in 2019, and now they have added to the conversation with Storytelling in Queer Appalachia: Imagining and Writing the Unspeakable Other edited by Hillery Glasby, Sherrie Gradin, and Rachael Ryerson. Storytelling in Queer Appalachia is an important work to have on the bookshelf for those interested in Appalachia, queer studies, or anyone wanting to contribute to a more equitable world.

Full disclaimer: The iconic rainbow cover caught my eye; I saw “queer,” “Appalachia,” and “storytelling” in the title and clicked to buy without noticing it was a scholarly work. I thought this was an anthology of fiction, poetry, and creative nonfiction like the Mann and Watts collection.

And I’m glad for that.

As Hayes’s article, “A Letter to Appalachia,” which opens the collection, states, “It’s time to talk about queerness” (19). As a nation and a culture, we are certainly doing that more than ever before. We’ve just had a U.S. president openly declare he has transgender Americans’ backs during his first address to a joint session of Congress. We have more queer characters in TV and movies, and their queerness isn’t always just a cheap device to further the plot.

Hell, I picked up two queer books at a southeast Kentucky Dollar Tree: one is a coming-of-age story of a transgender teen who is transitioning before she goes away to college, and the other is a YA love story between two male characters. Just right there in the Dollar Tree, in a place where there is no state-wide protection against discrimination based on sexual orientation or gender identity, in a place where “conversion therapy” (AKA church- and state-sanctioned torture of queer kids) is legal.

These local and national moments that acknowledge our human existence matter greatly.

But while queerness is being discussed and examined more openly, one area often overlooked is how this all plays out within the geography and culture of Appalachia. Queer folks in Appalachia are ignored by both queer discourse and by Appalachian discourse (bautista 148), and this book helps fill in some of the neglected discussion. Many readers will be able to connect to the anecdotes in the essays, either having experienced them or witnessed them.

That seems to be goal #1 of the collection, to show how the concept of “Appalachia” (our own ideation of it, and also the notions outsiders have of it) is a myth, that there is far more nuance, complication, and beauty in the messy specifics.

All three of the editors of Storytelling in Queer Appalachia have a previous or current connection to Appalachian Ohio. In the introduction, they start by saying the whole region is “multifaceted and impossible to understand as monolithic or singular” (1), a sentiment that would be repeated in many essays throughout. That seems to be goal #1 of the collection, to show how the concept of “Appalachia” (our own ideation of it, and also the notions outsiders have of it) is a myth, that there is far more nuance, complication, and beauty in the messy specifics.
Not only does the collection strive to “make queer thrive in Appalachia” but also to “allow Appalachia to thrive in queers” (1-2). The various essays touch on isolation, alienation, diaspora, code switching, Christianity, discrimination, underrepresentation, safety/violence, and how to shape the region’s future. They do so by discussing theory (you might be hard pressed to find a book that uses “queer” as a verb as much as this one), dissecting the 2016 election, collecting oral histories, writing about community art projects, and more.
In “A Pedagogy of the Flesh: Deconstructing the ‘Quare’ Appalachian Archetype,” Thomas-Reid, Jeffries, and Land draw on the regional distinctions of the word, between queer (pronounced “kwar”) and queer (pronounced “kwir”). They point out how Appalachian culture has always provided a small niche for people who disrupted expectations, like feminine boys, how they were seen as “kwar,” as different, a little odd, eccentric, and it was more acceptable than being explicitly “kwir” and saying you were LGBTQ+ or having open relationships where everyone could see them. This, in effect, creates a “don’t ask, don’t tell” dynamic (Dutton 38) and the pressure of respectability politics (bautista 151).
One distinction that echoes through the book is how Appalachia itself is queer in the denotative sense of the word. It’s a bit different. It is non-mainstream. It is “other” compared to the rest of the nation. Along with the assumption that the region is very religious, it is thought to be sexist, backwards, racist, and ground zero of Trump Country. But this isn’t something just put on us by outsiders. As Bumgarner shows in the essay “Working Against the Past: Queering the Appalachian Narrative,” when she rolled up on the Appalachian Queer Film Festival in Charleston, West Virginia, she assumed the people holding signs would be protestors, but they were in fact supporters of the event (176-7). Acknowledging how we have internalized these preconceived notions of what Appalachia can be for queer folks is an important piece of the discussion that is often missing.
The essays, in one way or another, repeatedly demonstrate how our various identities can be at odds with each other and with the broader community. Dutton writes if we’re in Appalachia, our queerness may not be accepted, and when we move away to urban centers, our queerness is more accepted but our Appalachianess isn’t (39). As Gunter writes, “the Appalachian queer refugee may be leaving one home without the promise of another” (101).
One thing I was very happy to see included was an explicit (though short) discussion of biphobia, including biphobia in the queer community (Gunter 99). Often people with plural sexualities are left out of queer spaces, discussions, and study (despite being more than half of the LGBTQ+ community) and the intra-community’s mistreatment of bi+/pan people needs calling out as much, perhaps more, than the mistreatment from the broader cisgender/heterosexual community . . . because we should know better.
In the end, don’t expect new, radical ideas in the essays’ theses. And actually, that is perfect because the familiar premises they promote as solutions are radical enough:
1. Telling the truth of our experiences can empower us and bring us into a more accurate narrative of the world. We reach out and show others they aren’t alone. We gain control of our own story.
2. Listening to others tell the truth of their experiences can humanize them for us, increase our empathy, and help us learn how to care for each other.
3. We need to center intersectionality, always. With so many different power structures and aspects of identity placing us uniquely on the privilege spectrums, we can’t ignore those dynamics. Everyone knows this. They know a rich white man and a poor white man live in different worlds, and those worlds are different than those of rich and poor Black men, etc. Even people who aren’t up on queer theory, identity politics, or intersectional feminism know these things are true. (Readers new to academic social theory may need to look up “mêtis,” “praxis,” and the like while they read, but it’s a manageable text for newbies with a quick google or two.)
This book didn’t need anything groundbreaking, no big “aHA!” moments. We know the way forward. And this book gives us a strong map to guide us on our work.
We can take our motivation to continue the work from Mamone and Meng: “Our ancestors were hellbent on carving out a life in these beautiful and unforgiving mountains. So are we” (200). We can take our direction of how to do that from Hayes: “Embrace the queer. And I don’t just mean the people that you decide are queer. I mean embrace the queerness in all of us” (35).

Melissa Helton lives, teaches, and writes in the hills of southeast Kentucky. Her work has appeared or is forthcoming in Appalachian Review, Anthology of Appalachian Writers, Shenandoah, Cutleaf, Change Seven, Pine Mountain Sand & Gravel, Norwegian Writers Climate Campaign, and more. Her chapbooks include Inertia: A Study (2016) and Forward Through the Interval (December 2021).