I sat like that any day there wasn’t rain, from September until the cold part of fall descended. It was the first week of October when the old man came over. I was rolling one of the nuts in my hand, and he came marching over with the help of his cane, his click, click, click, moving just a little too fast. The cane appeared to be leading him, like an overly excited dog dragging its owner by the leash. By the time I’d registered that he was heading in my direction, that he was darting along that little used path to my quiet corner, he’d already sat down beside me.
“That’s better,” he said, and he lifted his feet up and down, like he was a kid trying not to be bored. “Now tell me about what you’ve got in that bag?”

I was young and I didn’t know how to act around old people. I had some vague notion that all elders were authorities, that when they spoke, I should listen; that when they asked a question, I should respond. I unzipped my backpack and reached into my bag, and I was about to offer him one, until I saw my hands.

We sat there, and he chattered away as the sun began to go low against the horizon. What I could see were the trees in the park, the brick buildings of Main Street, the top floor of my old apartment building, and the autumn-toned mountains that surrounded the town. He told me everything, and I listened. He’d been a history professor at the college, and he told me about the classes he’d taught, how he’d spent his summers in Paris, in Tokyo, in Athens–how they’d gone to the museums and the temples and ruins. Each fall they became new people, he said. Now they were drinking sake; now they were eating baguettes with every meal. He was off to Florida next week, to go live with his sister. He was scared, yes, but change was inevitable. He hadn’t shared a space with someone in ten years. Would the house be sold? He couldn’t think about it yet. He was a talker, and in that way, he reminded me of her. After my father had left without warning–I was only six–she’d never shied away from telling anyone the truth of it.
“You never told me the name of your partner,” I said.
“Partner!” he shouted. “That word always gets me. Forgive me, forgive me. Jamie. His name was Jamie.”
The park was mostly empty now. The kids had gone home for the evening. There were a couple of teenagers smoking cigarettes on a bench near the basketball court. I recognized them from school–they were a couple years younger than me, though I’d never spoken a word to either of them.
I wanted to tell him about what it had been like, losing my mother in the middle of my senior year of high school. I wanted to tell him what it had been like moving in with my aunt and uncle, letting go of the apartment we’d lived in together since I was six years old. I wanted to talk about getting a job, learning how to cook my own dinner, how she’d done everything for me–how she’d cleaned, she’d washed, she’d worked, she’d loved. But I couldn’t. The words just wouldn’t budge from my mouth. She’d been that, too–the only person I could really open up to.
“Billy,” he said, “the sun is setting and I am getting cold.”
It was true–it was getting late, almost 7 p.m., and I hadn’t yet eaten. On winter days, we’d sometimes go and grab a sub, and she’d park the car at the edge of the park, and we’d keep the heat and the radio on and look out at the snowy ground while recounting our days.
He stood up, and I did too. I zipped up my backpack and put it on my shoulders–the bag heavy with the black walnuts. I grabbed my bike by the handlebars.
“Can I walk you home?” I asked, and when he started down the path, I assumed that was permission.
He was slower this time, and as the sun hit from that golden angle, I could finally see his age–the spots all over his skin, the bruised skin on his arm, the tufts of hair in his ears.
We walked in silence the five minutes to his front porch. As he climbed up the stairs towards his door, I realized I would never see this man again. I parked my bike on the sidewalk, followed him up the stairs, and held out my backpack. I said,
“Can I give you some of the walnuts?”
He said, “Sure, Billy.”
He opened his front door and said to wait just a moment; he was off to grab a bag. As he disappeared inside, I could see just a sliver of the foyer. He’d left the lights on. There were antique lamps and a glass chandelier, planked wood floors, worn rugs, carved balusters, faded art on the walls. There was a certain agedness to everything–but not the museum kind of old. Everything had been touched, handled, used. I wondered then what her stuff would look like to me now. My aunt had been kind–she’d said take your time. My mother’s belongings were waiting for me, stacked neatly against the back wall of my aunt’s garage.
He was back a few minutes later, and this time he came without his cane. He handed over a plastic bag.
He had seen me peeking in. He said, “You know, we keep them with us however we can. We put our little figurines on the shelves and the posters on the walls. Everywhere I look, even now, I see us together.”
I put the nuts in the plastic bag and handed the bag back to him. I didn’t know what else to do, to say. All I could think was what she’d told me, what her mother had told her.
I said, “First you crack the hulls–use a hammer. You’re going to want to do that soon. And then you wash them, and then you put them away to dry. You’ll want to keep them in a dry, dark place. Put them in a paper bag. You can keep them for a long time. Maybe a year, maybe more. When you’re ready, crack the shell. Smell them first. You’ll know if they’re still good.” 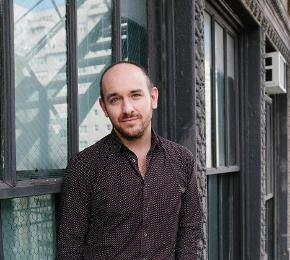 Jonathan Corcoran is the author of the story collection, The Rope Swing, which was a finalist for the Lambda Literary Awards and long-listed for The Story Prize. His essays and stories have been published and anthologized widely, including in Eyes Glowing at the Edge of the Woods: Fiction and Poetry from West Virginia, and Best Gay Stories. He received a BA in Literary Arts from Brown University and an MFA in Fiction Writing from Rutgers University-Newark. Jonathan teaches writing at New York University. He was born and raised in a small town in West Virginia and currently resides in Brooklyn.