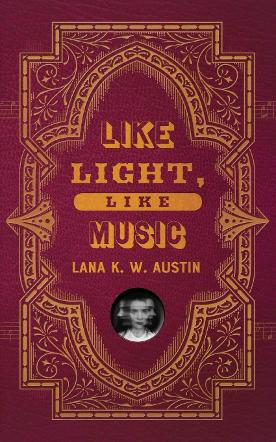 We know the story. Small-town girl returns home from the big city after years away, determined to make a difference. Lana K.W. Austin’s novel, Like Light, Like Music, however, is not just any story, and its protagonist, Miss Emmeretta Finnegan McLean, is not just any girl.

The sense of intrigue begins with the front cover, which is decorated with an almost oriental filigree from under which bars of music peek. In the center is a haunting, strangely blurred photograph of a woman looking out and to both sides, as if her shadow selves have somehow been captured on film. The whole cover prefigures perfectly the mysteries inside.

Indeed, Emmeretta, who goes by Emme, has quite the mystery to solve. Her cousin Kelly has been accused of murdering her ex and has apparently confessed. The only thing is, Kelly is badly injured and in fact lies handcuffed to her hospital bed. What’s more, it is all but physically impossible for her–or any human–to have committed the crime in question. Emme is determined to get to the bottom of things and find the truth.

Emme also has a second reason for returning to Red River, a fictional Kentucky town just over the border from Bell Witch Cave. Twenty-seven women, most of them Emme’s kin, had temporarily suffered what experts, including the CDC, called an “acute psychotic break” with no known cause. The women got better as quickly and as mysteriously as they’d fallen ill, with no explanation for either their illness or its cure. Knowing her connection to the town, Emme’s boss at a Washington DC paper had sent her to cover the sensational story. Unfortunately for him, Emme quickly realizes that she doesn’t want to and quits her job, although she plans to return to DC, which she now prefers to her childhood home.

Nothing, however, proceeds as planned. Not only is she mostly unable to see Kelly, but a host of memories and unfinished business beset her as well: memories of her first love, the various travails of small-town life, and above all, the vexing–at least to her–issue of her “mountain gift.” Simply put, Emme is prone to visions and auditory hallucinations, which may or may not accompany each other as a package deal, though music seems to affect her most: “The melodies, or sometimes the tone of someone’s voice, could birth a brand-new world. But it also happened in reverse, where what she saw, colors in particular, would make a sound or an entire song. Sometimes what she saw grew into a symphony.”

Emme does not really like or trust the gift and so has done her best to explain it away. As she tells her aunts in a moment of frustration, “All these things you want me to believe in. I never could see them. It was only my brain misfiring all along. Synesthesia.” Yet despite her denial, the longer she stays in Red River, the stronger the gift becomes. It becomes especially powerful after she visits her great-aunt Della up on Black Mountain, and again when she partakes of a special batch of ‘shine. Then there are certain songs, in particular murder ballads, that take the gift to a whole new level: “the Child Ballads made the most astounding images. When Emme first noticed that some of the things she saw later started coming true, she couldn’t reconcile it. She didn’t believe it was possible to tell the future, though many of her kin claimed they had that mountain gift, too.”

. . . the novel is at its strongest when, as in the murder ballads, these stories take center stage. Emme likewise is at her strongest when she confronts the sheriff, echoing her great-aunt Della’s words that “They got to believe the women. Believe every woman from now on.”

The ballads are not the only music woven throughout the text. It shows up sometimes as quiet humming, sometimes in a singalong, and sometimes as a reverberation in Emme’s head when her gift is at its most intense. While the insertion of music feels forced in some scenes, there are many more in which it flows perfectly, whether it be the thrashing Ramones when Emme talks to her first love’s mom or “a single flute” whose “sweet melody bounced up and down” as she embraces his orphaned child.

Beyond murder, music, and the supernatural, the novel tackles a host of other topics as well: coal mining, racism, cancer, the new millennium (it’s set in 1999), an unexpected adoption, the laws of physics, and more. It’s almost as if the novel, like Emme, wants to solve everything and save everyone. By taking on so much, however, the novel–again like Emme–sometimes loses sight of its primary focus: the accusation against Kelly and the mysterious case of mass psychosis. The two turn out to be inextricably linked, and the novel is at its strongest when, as in the murder ballads, these stories take center stage. Emme likewise is at her strongest when she confronts the sheriff, echoing her great-aunt Della’s words that “They got to believe the women. Believe every woman from now on.”

As with the disparate themes and storylines, parts of the dialogue may distract the reader, especially early on. Certain exchanges contain so much background information that they sound more like exposition than the way one imagines these characters would actually talk. While a profusion of details provides local color–we taste the greens and ‘shine, we shiver in the eerie gloom of a cave–there is sometimes a bit too much of this good thing. This is especially noticeable when the characters overexplain things, for example certain regional expressions, characters’ names, or the creatures and legends of Celtic lore.

Elsewhere, however, the language shines like the light that illuminates the story’s closing song. While Emme may have her mountain gift, Austin, an award-winning poet, has gifts all her own. Phrases like “shard of anxiety” or “DNA double helix of despair” stay with the reader long after the book is closed. Similarly, longer descriptions bring the reader’s senses alive in a sort of literary synesthesia that mirrors Emme’s own, scenes in which the language is at its lyrical best: “The sun, the way it showered the old barn wood with its warmth, created a song for her. It wasn’t one she’d ever sung or even heard. It was a simple fiddle and it sounded like it was skipping, the notes jumping around playfully. Much the same way the light jumped from rafter to rafter in the barn.”

This novel evokes potent energies, both explained and unexplained. It reminds us that the universe seeks balance and that if we’re not careful, unseen powers could force our hand. Everyone must do their part, in both concrete and less tangible ways. Everett, the town sheriff, must start holding men like Kelly’s ex-husband accountable, while women like the delightfully cantankerous great-aunt Deirdre must remain receptive to forces beyond this realm. As for Emme, her passion, determination, reporter’s skills, and mountain gift, mean that she can do all of the above and more.

Like Light, Like Music reminds us that it doesn’t matter how we come to see or know things. What matters is that we know what we believe and that we act on that belief. As Emme would say, “I promise it true” that when we do, our music will soar and our light will shine.

Laura Dennis is a writer, mother, musician, and college professor in Southeast Kentucky. Her nonfiction has appeared in journals such as MER VOX Quarterly, Kentucky Philological Review, and Bethlehem Writers Group, where she was the Spring 2020 Featured Author. She also manages, edits, and writes for the Attachment & Trauma Network (ATN) blog. She received an Honorable Mention for the Betty Gabehart Prize in 2017 and was a finalist for the Tucson Festival of Books Literary Awards in 2019.