Pauletta Hansel on
WWJD and Other Poems
by Savannah Sipple
Sibling Rivalry Press, 2019 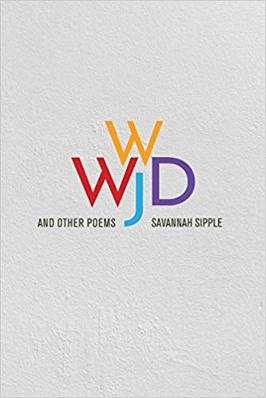 Late in her long and prolific life, May Sarton wrote, “Now I become myself. It's taken / Time, many years and places; / I have been dissolved and shaken, / Worn other people's faces.” Sarton’s words echo as I read Savannah Sipple’s debut collection, WWJD and Other Poems. This is clearly a book of “becoming,” and though Sipple, at 35, has years of living and writing before her, these poems announce a mature poet, her passionate and assured voice “Gathered into one intense / Gesture of growing...”

As many readers of this journal know, Savannah Sipple did not emerge a fully formed poet out of “nowhere.” She instead grew out of a very specific place, the Appalachian hills of east Kentucky, “in the mountains I hate the crooked / mountains I love the mountains I hate…” These poems, like the poet herself, could not have come from anywhere else. Those of us who know that place re-enter it wearing the word-body of Sipple, coming of age “legs up in the back of a black truck,” where men call women “sis” (“even when they want to fuck them”). A place where men, with the proverbial one hand, teach women to shoot to take care of themselves (“I am sick and thrilled at once / like my fear got scared off and took me with it”), while with the other “touch me because I asked him not to / repeat / I asked him not to.”

The persona Sipple has crafted for WWJD’s early poems is deftly held suspended by the poet’s words; she is both actor and acted upon by the land and its people which over the course of the book serve as mirror for each other (“Again, I let you / peck me like a crow plucks corn, newly planted, fertilized, / straight from the ground.”). There is nowhere to rest in these early poems, certainly not in the verbs: the poems’ characters rut, smack, goad, scour, grab, cling. It is the specificity of Sipple’s observations that keeps the men and women of her hills from being stereotypes. Each image is precisely rendered, fully itself and yet also a sturdy container to hold larger truths.

“This is what happens when you cut the world in two . . .,” Sipple writes of her Appalachia, “we blow ourselves apart.”

In Sipple’s world, girls are fighters even when they aren’t (“I was kind until I wasn’t Once / I started to slip that was it”) because that’s the way “You can stay / and survive.” And staying—or not—creates another level of tension in the book. Ultimately the poems’ speaker must do more than survive. She must also thrive. And so, it is the ache of tenderness for the place she must leave that allows these poems to be love poems to the land where she acknowledges, “I never wanted to stay I never wanted to / leave…”

Sipple’s reclaiming of Jesus as her “best girl friend” is nothing short of a miracle. Jesus is, of course, the J of the book’s title, itself an acronym for What Would Jesus Do, no doubt a rallying cry the young poet heard often in her church camp days.

A piece of the “becoming” that WWJD chronicles is that of coming out as a lesbian. The speaker’s coming to voice within her own sexuality is inextricably linked to her coming to self as a woman and as a poet. When early in the book, Sipple writes “…I’m losing my voice. I’ve tried to wear you / close as overalls arms locked heavy over shoulders,” the multi-faceted “you” seems both human male and the toxic masculinity of the book’s Appalachia itself (“I can’t strip them / can’t scour your hills away”).

“Fat,” like sexuality, is an aspect within Sipple’s poems which the speaker must claim, both previously banished as unacceptable vulnerabilities. “In the beginning was the word and the word was FAT,” she writes. And near the end of a longer prose poem narrating the body shaming within the speaker’s life: “My therapist says where do you feel this trauma. The tears answer, always, in my back.” By WWJD’s later poems, the speaker has claimed both body and hills as a feminine home for herself and lover: “My body is a holler I’ve tried to escape time and time again, but now, with this woman, I am home.”

In WWJD’s final section, Sipple’s reclaiming of Jesus as her “best girl friend” is nothing short of a miracle. Jesus is, of course, the J of the book’s title, itself an acronym for What Would Jesus Do, no doubt a rallying cry the young poet heard often in her church camp days. I have hesitated to quote too broadly from this section as the acuity of Sipple’s wit and wisdom are a culminating shout of halleluiah for this internalized guide for the speaker, and thus for us. That these hard-earned title poems appear at the end of the book is one of Sipple’s many gifts to her readers. Might I just say, this Jesus kicks ass.

As does this poet. In the tradition of Appalachian poetry (and of Jesus, himself), “story” is usually at the heart of Sipple’s poems. And within the telling of these stories, there is not a single misstep. Her skill is such that we enter fully into them and find ourselves carried and swept to new truths—perhaps uncomfortable, heartbreaking truths—but we are held there within the trustworthy craft of Sipple’s poems.

I began this review with May Sarton’s words. Sipple chose as epigram to the collection Dorothy Allison’s: “I’d rather go naked than wear the coat the world has made for me.” In WWJD and Other Poems, Savannah Sipple takes us beyond mere nudity. “I want to be marbled, so that if you were to slice me, you’d know what a good cut I am,” she writes. We know.

Pauletta Hansel is author of seven poetry collections, including Palindrome (Dos Madres Press), winner of the 2017 Weatherford Award for best Appalachian poetry book, and Coal Town Photograph (Dos Madres Press 2019). Pauletta was Cincinnati’s first Poet Laureate from April 2016 through March 2018 and leads writing workshops and retreats in the Greater Cincinnati area and beyond. She is co-editor of Pine Mountain Sand & Gravel, the literary publication of Southern Appalachian Writers Cooperative.

Read all of Still: The Journal's past reviews.