Kathleen Brewin Lewis on
Everything in the Universe, poems
by Amy Wright
Iris Press, 2016 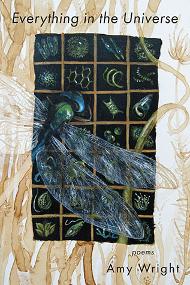 If the renowned naturalist and entomologist E.O. Wilson were an eco-poet, he might be Amy Wright, lyrically describing insects as if they were the rarest of jewels, displaying encyclopedic knowledge of the exoskeletal world in the poems of Everything in the Universe. In fact, Wright begins Part I of the four-part Everything, with a quote from Wilson: “Biodiversity is all we have.” She also entitles a poem, “Biophilia,” after the theory Wilson coined that the bond between humans and other living systems exists and is instinctive.

Everything in the Universe is Wright’s first full-length collection, following closely on the heels of her collaborative poetry work in Creeks of the Upper South with the poet William Wright. Amy Wright is nonfiction editor of Zone 3 and the author of five chapbooks including the prose collection, Wherever the Land Is, and a new full-length poetry collection, Cracker Sonnets.

Wright revels in these colorful names, as she does in the minute details of her subjects. The red-eyed treehopper is “the size of a southern/belle’s broken pink fingernail,” while ant lions “fledge lace wings.” The “felt-pelted bristles” of the velvet ant “glisten in aposematic signal”; the cobra lily has a “hairy gullet” and “mincemeat-/making juices.” That yam weevil wears an “outfit/in a blue-banded tunic/with tropical longitudinal/pinstripes, perfect for/afternoon executive meetings/or working lunches in five-star restaurants.”

As in her description of the yam weevil, Wright also succeeds in weaving popular culture references into these poems. The flower beetle is a “70’s disco gypsy/otherworld holdover/come to show earthlings/how to shimmer and shake.” The poem, “Sharpshooters” mentions the 80’s arts and crafts craze, Shrinky Dinks.

Wright was an English major in college, not a biology major. But growing up on a farm in southwest Virginia put her in touch with the natural world—and she’s never lost her craving for it. According to an article on the website of Austin Peay State University where she coordinates and teaches in the creative writing program, Wright was working on the essays in Wherever the Land Is, researching human consumption of insects as a possible answer to humanity’s mounting need for food sources. Her research fueled her fascination with insects; she began to write this collection of poems about their endless variety.

Because many of us do not possess Wright’s deep knowledge of entomology, some of the 57 poems in Everything require a bit of research on the reader’s part to comprehend—or at least a glance at the dictionary. It’s helpful to know, for instance, that click beetles have a mechanism on their sternums that clicks so hard it can flip them off their backs and into the air, and that Jan Fabre, named in the epigraph to “Heaven of Delight,” is a multi-disciplinary Belgian artist who decorated the ceiling of the Royal Palace in Brussels with 1,600,000 jewel-scarab wing cases. The word “pygidia” refers to the hind section of invertebrates: the “fulgurant-lensed mourners” in “Dragonhunter” have eyes that flash like lightning. And Robert Hooke, mentioned in “Micrographia, or, Some Physiological Observations of Minute Bodies Made by Magnifying Glasses with Observations and Inquiries thereupon” and in the epigraph to “Of the Feet of Flies,” was an English “natural philosopher” who published a book in 1665 that described his observations with microscopes and telescopes.

“Ten Thousand Car Hood Lakes Shimmering After Rain” captures the imagination as Wright describes the tiny worlds created in single drops of rain: “great diving beetles,” “water tigers,” “Milt-sift village mothers.” And who can resist the long-limbed title of “Bloody-nosed Beetle, Stopped in His Heathland Trek, Explains Intimacy to a Welsh Boy Who Thinks He Found a Pet,” in which the beetle tells the boy, “I will never be your dog . . . make puppy eyes at you”?

Wright’s richest language is on display in three particular poems, each of which features four sections and concerns a famous female poet . . . and bees: “Dickinson’s Bees,” “H.D.’s Bees,” and “Fanny Howe’s Bees.” From the “Joyful section” of “Dickinson’s Bees”:

Who wouldn’t want to be swept,

golden groceries around you.

And from the “Estranged” section of “Fanny Howe’s Bees”:

A beekeeper hums to keep

companionable grit in the back of the throat,

Wright’s collection hums, buzzes, reproduces, alights. She bears eloquent witness to E.O. Wilson’s opening statement that “biodiversity is all we have.” Because all we have, if we’re lucky and take care, is everything in the universe.

Kathleen Brewin Lewis is the author of two chapbooks of poetry, Fluent in Rivers and July’s Thick Kingdom, (FutureCycle Press 2014 & 2015). Her writing has also appeared or is forthcoming in Still: The Journal, Appalachian Heritage, Tar River Poetry, Valparaiso Poetry Review, The Christian Century and San Pedro River Review. A two-time Pushcart Prize nominee and a Best of the Net nominee, she lives in Atlanta and Savannah with her family.