Our house was Gene Schumate’s first draft.
His basic plan, to profit from the prototype,
then build again. All those VA loans post WWII.
A cistern under the porch was cheaper than a well.
Maybe he didn’t know about ground wires.
Maybe the story of an underground lake was true.
For whatever reason, lightning struck us
more than odds could explain.
One strike took out the oven.
Another fried the toaster.
The phone shrieked ghost rings that matched
no code we recognized from the party line.
After school, three sisters settled in to snack
and watch Dark Shadows, our chores put off an hour—
the buffer before our parents drove the 26 miles from work.
Suddenly, lightning snapped off the power.
The house fell darker than the vampire soap opera—
except for the lone glow of TV in story twilight.
I closed my eyes to unplug the cord from the wall outlet.
My sisters screamed. Right there in black and white.
Jonathan Frid courted vampire sweethearts
for ten more minutes before the tubes sizzled.
Afraid to move, we waited as the undead screen
collapsed to a single dot that winked itself to sleep.
At that moment, the house lights blinked on.
We made our beds and washed the dishes.
In silence we swept those knotty pine floors,
heads bowed in the heavy soup of surge.
“Dark Shadows in Afterglow” appears in Roberta Schultz’s new poetry collection, Underscore, from Dos Madres Press, 2022, and is reprinted here with permission of the press and the author. 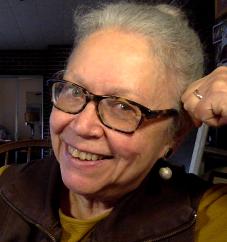 Roberta Schultz is a singer-songwriter, teacher, and poet originally from Grant's Lick, Kentucky. Her poems and song lyrics have appeared in Women Speak, Vol.7, Sheila-Na-Gig, Panoplyzine, Riparian, Pine Mountain Sand & Gravel, Kakalak and other anthologies. Three of her chapbooks, Outposts on the Border of Longing, Songs from the Shaper’s Harp, and Touchstones were published by Finishing Line Press. Her latest chapbook of poetry, Asking Price, was accepted by Workhorse Writers for their 2022 series. Underscore, her first full-length collection, was published by Dos Madres Press in May 2022.