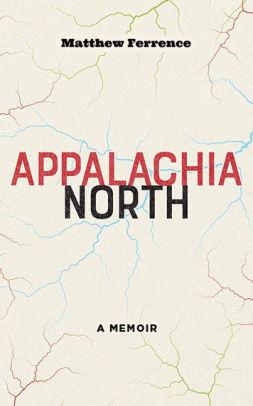 Matthew Ferrence's Appalachia North is both memoir and outward-looking examination of place: what it means to be from somewhere, how our relationship to home can change, and the complicated and too-often negative role Appalachia plays in the national imagination, and in its own.

Ferrence was forty when he received a life-changing diagnosis. But he really wants that to not be the point: "I am not yet ready to tell you about my brain tumor, that flood and recovery and hopeful renewal," he writes, dozens of pages before he admits that this buried lede is part of what the book is about. As the title indicates, this is very much a book about Appalachia, about Northern Appalachia in particular, about how places are defined, how maps are drawn, and how a population and a culture are denigrated. It's about erosion and recuperation, both geographic and personal. It's also a memoir. Marie Manilla teaches that every successful story, essay or poem must possess "the thing and the other thing," and Ferrence's brain tumor is the other thing that sheds light on Appalachia.

The author grew up in southwestern Pennsylvania, on his parents' farm, which they purchased and worked to restore to a native and natural state, in appreciation of Wendell Berry's land ethic. He was both country and city: "I grew up as a nerd and a farm boy, as a 4-H club president and a high school thespian, with close friends who were the children of other professors, but I was also friendly with the neighbor kids who spit tobacco juice into Mountain Dew bottles in the back of the school bus during our morning pickups." These are some of the earliest contradictions and complications of a memoir that is full of them. Ferrence is from Northern Appalachia, but he didn't know it when he was growing up there.

In his "Preface (of Sorts)," he writes: "I seek in this project to build layers of my own observation in a way not unlike the layers of sediment that form the substrate of this region. Appalachia is bigger than its perceived borders, and my desire to write about my Appalachian rootedness is built from the impulse to find out instead of define. I write in layers, both geological and metaphorical, to foreground complication." These layers are both built up in Ferrence's telling, and revealed as he mines downward, discovering what he stands on.

What is Appalachia? Where are its boundaries? And while it's true that there is poverty and decay within those borders—if we could but find them—why is that so often considered to be all that Appalachia has to offer? In considering the region, Ferrence of course considers its extractive industries (coal, timber, fracking) and the ways these damaging industries have failed to bring wealth to residents. He also considers all the other Appalachian stories that go largely untold: those of art, diversity, inclusiveness, nerdy suburban kids who play saxophone and golf. Cities.

Metaphors are thick on the ground in Ferrence's Appalachia. The mapping of a region meets the mapping of the author's brain: both, it seems, are most interested in what might be mined or removed. Layers are both mountains, coal deposits, sandstone, silt; and the places the narrator moves to, the experiences that shape his life, both those chosen (jobs, hobbies, homes) and unchosen (the tumor). Consideration of layering leads to meditations on palimpsest and pentimento. Palimpsest, "a state of layered fullness that strikes me as a more useful and accurate definition of place than any measure of stable, common, clichéd, frustrating, hateful notion of the authentic ever can." [emphasis in original] And pentimento, or painting over, sometimes in the interest of making corrections, sometimes to reuse a canvas in times of scarcity, sometimes as a means of deepening and richening the beautiful.

Appalachia, perhaps more than many places, has been described by those outside it. But "the lines on maps mean nothing to a red-tailed hawk, or to a slow-moving glacier, or to the rumbling birth of a mountain range, or to the long-wearing erosion of time and history, or to wandering foxes."

"To describe a place and to assign it a name is to fix it permanently in relation to the one doing the describing and naming." Appalachia, perhaps more than many places, has been described by those outside it. But "the lines on maps mean nothing to a red-tailed hawk, or to a slow-moving glacier, or to the rumbling birth of a mountain range, or to the long-wearing erosion of time and history, or to wandering foxes." And perhaps they fail people, too.

Besides layers, and all the metaphors they yield, Ferrence is concerned with the concept of reclamation. Too often in Appalachia, the companies ordered to "return to contour" the landscape they corrupt offer a new set of contours without regard for what has truly been lost. A hillside's silhouette is only one perspective, one way of looking at damage. "We might be returned to contour, or repaired, or our cycles realigned, but we are not fixed, restored, back to what we were." You can't go home again. Ferrence interrogates the challenges of reclamation, but also the linguistics: to claim, to reclaim, to claim reclamation. In a certain context, he argues, "reclamation strikes me as a violent term, even if it's the best we have. Reclamation implies a continued cycle of domination, very little change to the conditions of power that led to problems in the past... Instead of reclamation, I desire the wisdom of repair."

Appalachia North achieves a balance between the personal material of memoir—Ferrence's moves and feelings, the large and small but always momentous events in his discovery and treatment of the brain tumor—and the larger story of place, region, and belonging. He keeps circling, chasing, worrying the idea of defining place, from map lines drawn by the Appalachian Regional Commission beginning in 1965, to other outsider and insider perceptions. Ferrence's research-driven examination of the region's history, the fallout from extractive industries, and the geology and geography of mountains will be accessible to readers unfamiliar with Appalachia. The final effect is appropriately complex: Appalachia is indefinable, and everyone's relationship to the idea of home is necessarily knotty.

He is also very good with outside voices. Ferrence shares a hometown with Edward Abbey, far better known for red-rock Utah than he is for Northern Appalachia. Ferrence, returned as an adult, upends survey stakes on the family farm, and sees the obvious parallels to that more famous son of Indiana, Pennsylvania, who rips survey stakes from Arches National Park in Desert Solitaire. Numerous authors and other voices—some that he admires, some he argues with—populate these pages along with Ferrence's own perspective, again enriching and complicating.

Julia Kastner is a book reviewer, bartender, dog lover, beer drinker, mountain biker, and native Texan. Her creative nonfiction has been published at Slag Glass City, Word Riot, and You Are Here Stories, and she holds an MFA from West Virginia Wesleyan College. She currently lives as a nomad out of a van named Foxy.