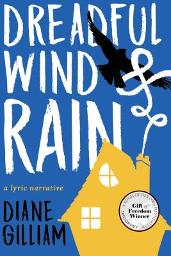 Diane Gilliam’s Dreadful Wind & Rain drops the reader into the story of a young girl and spans through her formative, marriage, and post-marriage years. In the early poems, the reader witnesses how the speaker is significantly damaged by the acts of others, particularly of those who should love and protect her the most (not excluding herself). The narrative moves in and out of the voice of a speaker named Leah, along with the Biblical Leah. Intermingled within are allusions to fairy tales and ballads, of which the collection takes its title, as “Dreadful Wind and Rain” is also a ballad about one sister drowning another over the love for the same man. This collection covers the psychological landscape of pain and betrayal, yet ends with self-empowerment.

In the opening section, “Girl,” the foundation of a significant inequity between siblings is set early by the parental figures. In the prose poem, “The Bargain,” the father says to the “I” of the poem that he and her mother will be praising her sister more: “You’re so special that sometimes she feels like she’s not.” While the impetus may be to shower each daughter with equal amounts of love and attention, it fails. Instead, the father reveals his own immaturity by attempting to rationalize to his eldest child that she’s mature enough to grasp such: “I know I can tell you this even though you’re / only seven, so when it happens you’ll understand.” The poem comes full circle in a horrifying yet appropriate image that sums up the damage the parents are causing: “. . . but we’re going to have to chop off your hands.”

Following “The Bargain” is a companion piece where the speaker’s mother is the one to reinforce the younger sibling’s importance by admonishing the elder to “go / find your sister, Leah. Rachel / will be lonely.” Leah, yearning for attention from both her aunt and mother, knows that Rachel “makes fun of aunt Tikva,” and Leah has no desire to include her younger sister, but she also does not have the power to disobey, and the poem concludes with the aunt asking, “what shall we do for Leah?”

The answer to this question is an ongoing collection of images of what is done to Leah not only by her parents, but by her own husband and sister. In “The Naming of Scars,” the speaker describes both physical and psychological scars. An innocuous scar above the “right eyebrow / where I missed, getting into / the family car” to the more profound “glossy dent around the finger” that marks a failed twenty-five-year marriage where “. . .the husband and the sister / win,” to the final ominous stanza. The speaker is in the “waiting room” and instructed to “Mark in blue, . . . the places that are numb.” It’s no wonder that the speaker is numb. She is outshadowed by her sister, and unfulfilled by her desire to be visible to her parents, as revealed in the final poem of this first section where the speaker notes a single, all too brief instant: her mother gazes fully upon her only to turn “back toward the sun.”  What is Leah looking for? asks her mother, “Anyone” she responds.

The next phase of growth for Leah occurs during the second section of poems titled “Anyone,” where a marriage with a growing chasm is deftly depicted in the villanelle, “His and Hers.” The first stanza notes how much the speaker enjoys sharing a bed with her husband, how she “loves how every night in their bed he lies” and how “He lets her talk, he lets her sing.” The husband even tenderly moves her arm when “he thinks she’s sleeping,” as the villanelle takes a turn with skillful wordplay:

He quiets. The more she worries and pries
the less he tells her about anything.
She’s sure every night in the bed he lies.

Just as the parents tell the young Leah to shrink herself in the presence of her sister, Leah’s own mother-in-law asks the same in “The Fairest of Them All” where she encourages Leah to slow down on her graduate work so that her husband “could still catch up and feel like he’s doing well. I’m only trying to / think what would be fairest to us all.” But things are far from fair, as the poems in this second section highlight the hurt of betrayal: Leah’s husband beds her sister and, there is no opting out for Leah. Yet in “The Twelfth Wise Woman,” healing begins as this wise woman enters,

she comes in
through the dark, through the back door
of no return
to who you were before.

You cannot speak
but she takes her place and she answers, Sleep.

After sleeping, “as long as it takes,” the speaker owns the brokenness of her marriage in “Now” and realizes she “will not die / of this, nor be poor in the issue of love.”

Diane Gilliam is the author of three previous collections of poetry: Kettle Bottom, One of Everything, and Recipe for Blackberry Cake (chapbook). She has received the Chaffin Award for Appalachian Writing and a Pushcart Prize. She is the most recent recipient of the $50,000 Gift of Freedom literary award from the A Room of Her Own Foundation.

“Or Else,” the penultimate section, opens with a Genesis moment, where the speaker embraces her own agency and signs the deed to her own home:

Let me pick up a broom and sweep
nothing under the rug. Let me sweep it all
into the light. Let me do it. Let there be time.
Let there be light.

The themes of growth and renewal continue throughout this section, with “Three Things That Happened Yesterday” telling how the speaker exchanges smiles with other women in a newfound happiness, as she purchases yarn that becomes a metaphor for her own renewal: “You just won’t believe, I told the yarn as / I set the bag in the car beside me, / all the things you are going to be.”

Allusions to fairy tales continue to unfold, ranging from a spinning wheel, the sorting of seeds, to an apple. In “The Apple” the traitorous sister appears with the fruit, wanting to be forgiven, but with the heavy handed, “if only you / would do / what Jesus would do.” The speaker is offered to “Take a bite,” but the apple is not eaten. In “Stones,” the younger sister appears “thirty years” later with her metaphorical bag of stones, “each stone / was a story she told about how she hadn’t really done anything / she had done.” As the younger throws stones at her sister’s windows, the stones only bounce back, as “the window was perfectly clear about who had done what,” and the sister has no choice but to leave, dragging her bag with her.

The final section, “After,” has the fewest poems, yet they serve to tie up the narratives running through the collection, from the “Psalm of Leah,” to the consummate final poem, “Leaving the Story,” with its allusions to fairy tales and to the thresholds we all cross,

. . . It is not wrong
to pause on the threshold, here at the very
end of the story. Behind you, everything ever.
before you, on the dark road,
everything after.

Gilliam’s poems hang together by mirroring the speaker’s psychological growth, and supporting this emotional progression is the variety of poetic forms that she incorporates throughout her collection. Gilliam does not limit herself to one style; instead, free verse poems reside alongside more formal types like the formal villanelle (that aptly reflects on marriage). Likewise, poems from the Biblical Leah are formal in style, as their linkage to the Old Testament is weighty. However, intermingled are prose poems that reflect the speaker’s current situation, often by retelling or alluding to fairy tales, such as Snow White or the Handless Maiden. Regardless of form, Gilliam’s attention to sound and packed images welcome the reader back for a second and third reading. The emotional depths surveyed in these poems are rich, and the speaker tells her own fairy tale with a dose of realism that is, in the end, affirming to both the speaker and the reader.

Rosemary Royston, author of Splitting the Soil (Finishing Line Press, 2014), resides in northeast Georgia, with her family. Her flash fiction and poetry have been published in journals such as NANO Fiction, Appalachian Heritage, Southern Poetry Review, Kudzu, Town Creek Review, *82 Review, and Still: The Journal. She’s the VP for Planning and Research at Young Harris College, where she teaches the occasional creative writing course.

Review all book reviews featured in Still: The Journal
Tweet